My occasionally achy body, my bifocals, and the act of subtracting 1974 from the current year all conspire to inform me that I am indisputably in my middle age. This happens to all of us, if we’re lucky; my main goal as an increasingly older person is to not be so out of touch with young people that my image of them becomes completely divorced from any plausible reality. Like, young people, ha ha! Always with the writing their own vows, and the non-monogamy, and the “Is this, like, a hypothetical?” catchphrase that they probably got from Gossip Girl or rap music! You know? Not virtuous, like we were when we were young! 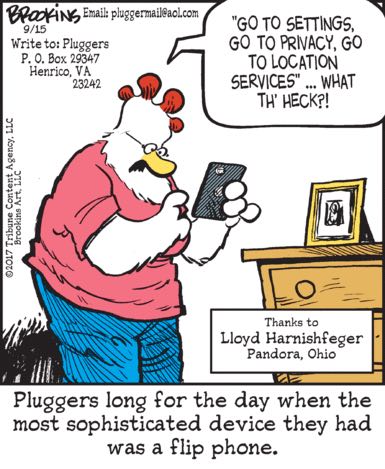 On this topic, I am reasonably certain that there’s at least one Pluggers panel from the mid-’00s that features an irritated manimal being technologically overwhelmed by having to deal with a then-state-of-the-art device that we would only now anachronistically call a “flip phone.” Time makes pluggers of us all, is what I’m saying.

As the parents of teens, one would expect Blondie and Dagwood to be in their mid-50s at the high end and perhaps as young as 40, so the idea that Dagwood finds omnipresent technology like tablets or smartphones baffling rings false. I do 100% approve of his decision, between panels two and three, to theatrically turn his pockets inside out. That’s the kind of solid commitment to shtick that really keep a marriage lively!