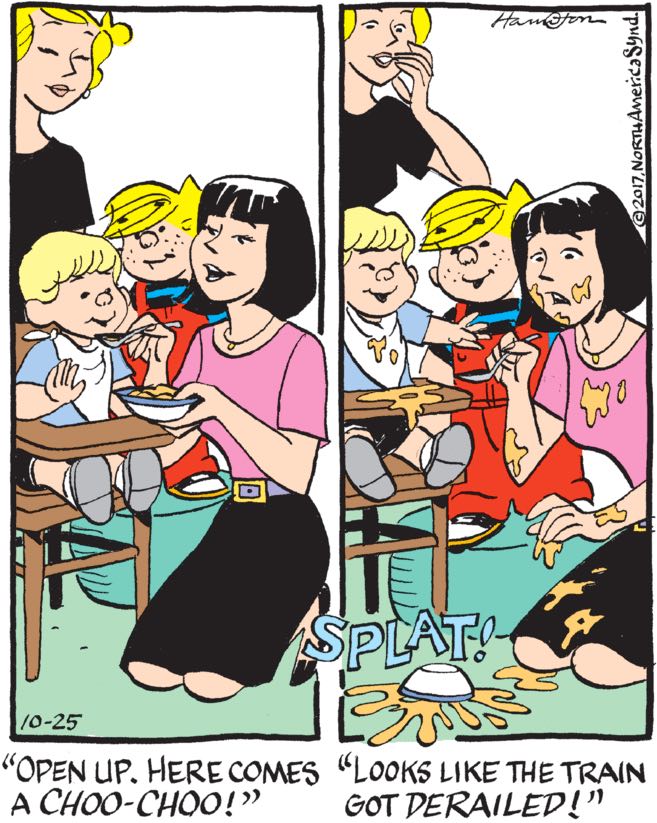 There are no recurring adult characters in this strip other than George and Martha Wilson. Instead, we see an endless parade of one-off adult visitors to the Mitchell home, with the implication that Henry and Alice are desperately trying to normalize their lives by making friends more or less their own age, only for Dennis to alienate them by saying the darndest things — or, more often, repeating a darndest thing that one of his parents said behind their acquaintance’s back. If that’s starting to give you a picture of the real reason for the Mitchells’ stunted social life, consider today’s installment, where Alice, hungry to sup on human misery, has brought Dennis to some random new mother’s house, so he can make fun of her parenting skills just because her little kid does what little kids do. And sure, Dennis is kind of a dick about it, but whatever! He’s, what, five? Look at Alice in the background in the second panel, a subtle but cruel smile on her face. The menace doesn’t fall far from the tree.

Like many sassy cartoon characters, Marvin goes through life with a heavy lidded expression meant to convey detachment and ennui. In panel two, we learn what it takes to snap him into a state of alertness: the possibility of being prosecuted for war crimes.