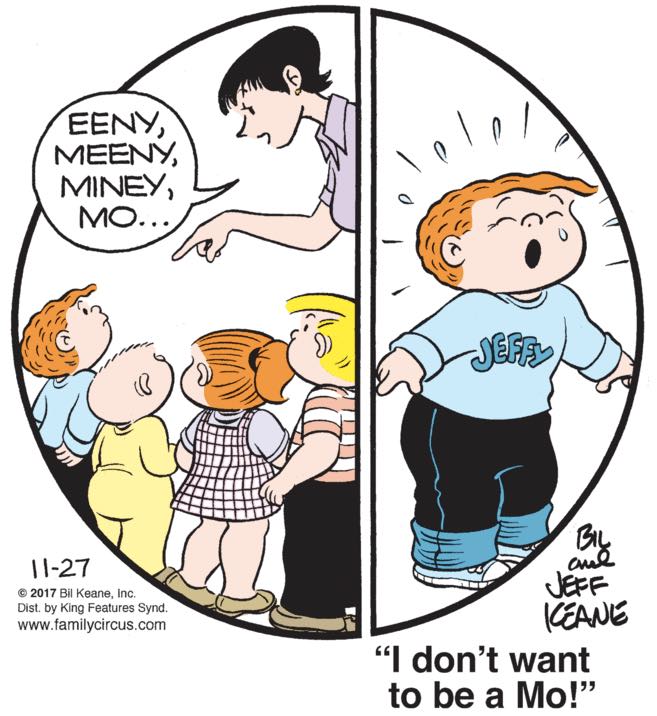 It’s hard for me to really conceptualize how old and how far along on the path to adulthood the Keane Kids are supposed to be, partly because they have to be a little unrealistically precocious to do all the darndest-things-saying, partly because they’ve been around for longer than I’ve been alive — and also, let’s be real, partly because I’m not a parent and have a hard time keeping track of how kids at particular ages are supposed to act or look like! Like, I have a friend who has a six-month-old baby and she was talking with another mom about how much her son weighed and the other mom was like “Oooh, wow” so I knew it was unusual but in which direction??? Turns out he’s a big old baby, but the point is, sometimes I forget that Jeffy is, I guess, a toddler. Right? Like, he’s too young to school but he’s old enough to walk around and talk? Is that a toddler? I assume that there’s a stage you go through in toddlerhood where your sense of self really gels and asserting your identity becomes very important, which is why Jeffy is furious at being called Mo and also is wearing a shirt with his name on it, which he can’t read but probably he’s been assured it says “Jeffy.” Either that or Jeffy knows full well that the “Mo’s” are abandoned at the bus station, and the t-shirt is there to tell whoever collects him what his name is. Why aren’t any of the other kids wearing name t-shirts? Because Mommy knows where to start “eeny”-ing in order to “mo” on Jeffy. She’s not dumb. Not like Jeffy.

The Alps were one of the few parts of Europe that were unscathed by Norse raids, and the League of the Three Forest Cantons that would eventually become the nucleus of the Swiss Confederacy wasn’t established until 1291, long after the Viking Age had ended. Still, shoutout to the artist here for accurately setting the scene with a Swiss flag fluttering above the parapets, with newspaper readers being free to imagine it in its accurate white-cross-on-red coloring. And further shoutout to the syndicate colorist, who instead created a green cross on a white background, which in California at least is universally recognized as the symbol of a medical marijuana dispensary. It explains a lot about the way comics get colored, anyway.