Sorry I haven’t updated you on Mary Worth in a bit, but rest assured that what was happening like two weeks ago — Tommy thought-ballooning about how his girlfriend is eventually going to find out about his terrible past — has continued happening with absolutely no dramatic forward motion of any kind. This remained true yesterday, and since Monday is the traditional day for new plots to being in soap opera strips, I have to imagine that today’s action pertains to the Tommy-Brandy storyline somehow — but how? Who is the mysterious figure helping Mary pick up her canned tomatoes? Why is Mary buying tomatoes? How can she maintain her taupe-to-ecru food spectrum if she’s putting tomatoes in things? Let’s all tune in tomorrow to find out!

Mr. Dithers letting Dagwood get a glimpse of the poor old man he’s kept enslaved for the last 30 years is a real power move that you have to respect! I also note that Steadfaster’s weird hairstyle looks kind of like Dagwood’s, so maybe this is supposed to be a threatening look into his future? He also looks vaguely like the villain in the 1983 Doctor Who serial Mawdryn Undead, so there’s that: 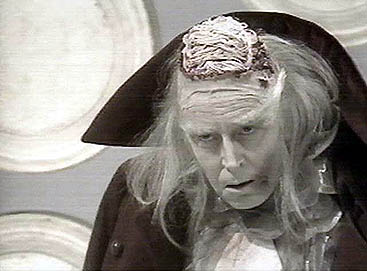 I have to assume this is a coincidence, because part of the vibe I get from Blondie involves extreme hostility to nerd shit of any kind.

Usually when Crankshaft makes his terrible wordplay, he’s glaring at his interlocutor/victim with dead-eyed hostility, so I guess this in some marginal way can be considered an “improvement.”