But if he were Dale Carnegie — if Carnegie faked his 1955 death, if he managed to still walk among us today at the age of 130 thanks to the dark spells written in blood in his forbidden necromantic tome How To Stop Worrying And Start Living Eternally, if he travels the land in disguise as a wounded and angry man to try to discover the chosen one who can win any friend, influence any person, and if that chosen one turned out to be Mary — well, I’m not saying that’s at all likely. But it’d be a pretty cool scenario, you know? 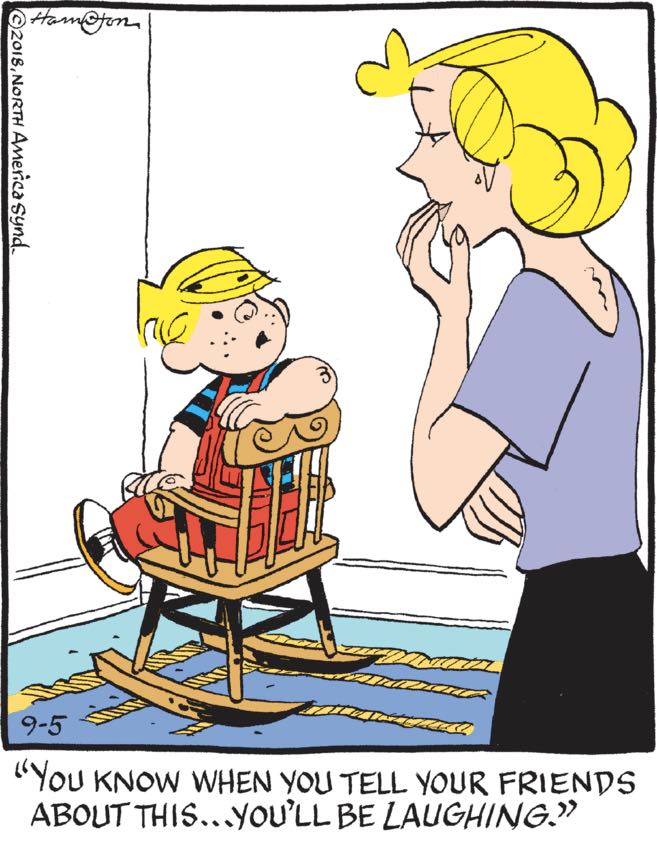 Ah yes, it appears that Dennis is finally figuring it out: the reason he’s always been allowed to run wild, been indulged as he harasses Mr. Wilson and blurts out rude nonsense in front of other adults and antagonizes his teachers, is because his mother thinks it’s funny. It doesn’t matter how many people he alienates, that he’s sabotaging his education and his future, as long as she gets some droll anecdotes about what a little shit he is that she can share with her similarly jaded friends. The facial expressions here — Dennis’s of mounting, horrified realization, Alice’s of cruel amusement — make it clear that the menacing dynamic has shifted, or perhaps more correctly that we’ve been wrong about their power relations all along.