You ever notice that a significant portion of the dialogue in post-Woody Wilson Rex Morgan, M.D., consists of characters saying things like “Makes sense” or “You might be right about that” or just otherwise agreeing with whoever they’re talking to? It doesn’t really make for gripping drama, and also, if you want to get specific, the restaurant industry, like just about every other form of retail, is increasingly bifurcating into two segments: one that’s increasingly higher-end and higher-margin, and another that stays just a step above fast food while emulating much of the industrial and assembly-line production processes that make it possible to eke out a profit from low-priced meals. In other words, it’s going to be delightful watching everyone tell Jordan that he just might be right about his very sensible plans, right before he dramatically goes out of business less than six months after he opens. 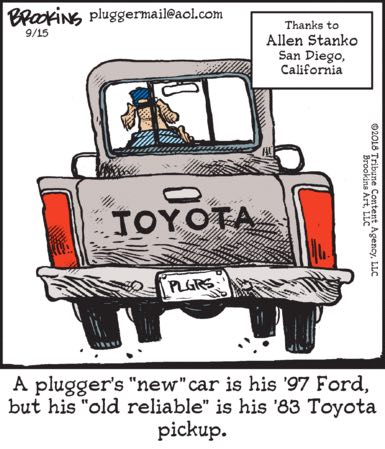 Is that a plugger … driving … a Japanese vehicle???? This nightmare is what comes of allowing Californians to identify as pluggers.