More often than not Gil Thorp will follow a couple, sometimes interrelated, plots over the course of a sports season, and it looks like we’re getting two football plots this year: whatever the heck’s going on with Tiki Jansen, and some long snapper drama. Special teams are the goofiest part of football, so I’m extremely excited to see them get the spotlight in Gil Thorp this year. It seems that the long snapper is also the best punter, and for those of you who don’t follow football, this is a problem because the punter is the person the long snapper hurls the ball to, in the graceful position demonstrated in panel one. My sincere hope is that this dilemma is solved using cloning, or possibly time travel.

“Mr. Wynter, I just wanted to see how you were coping after your tragic loss. I know what it’s like to lose someone dear myself! In my case that someone was my husband, a human being, who some might say is a little more worthy of grief than a mere animal, but I won’t comment on that one way or another. Also, my husband left me a good deal of money after his demise, ensuring my financial stability. Did your dog leave you any money? At any rate, I hope this can of processed salmon is of comfort to you!” [she gently lobs the can of salmon at Mr. Wynter; he fails to catch it and it hits him square in the face] 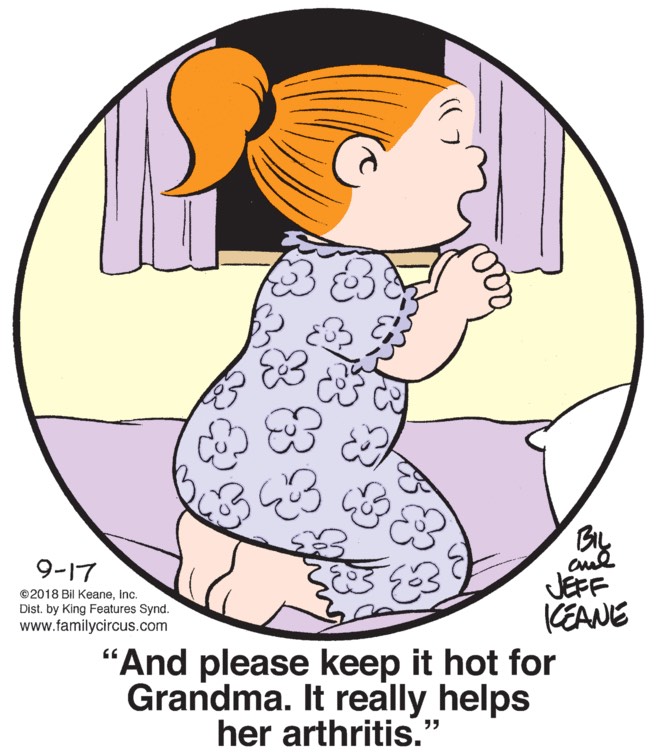 I was briefly thinking that at least one of Dolly’s grandmas was dead and only seen in the strip in ghost form. I was wrong, of course — it’s her maternal grandfather I’m thinking of — but wouldn’t it be funny if I was right, and Dolly was beseeching God to keep the heat turned up on her grandmother’s damned soul, in hell? Anyway, long story short, I’m a bad person.