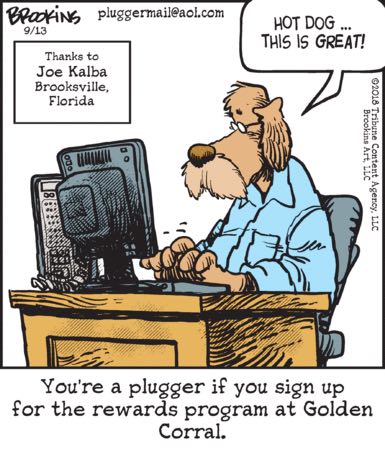 Here’s some “behind the scenes” scoop: I was originally going to just do a drive-by “Haw haw pluggers don’t use computers” joke here, but then I thought: you know, in reality, pluggers have been going online for years now, as any visit to Facebook clearly indicates. And so I decided instead to do a deep dive on the rewards program at the Golden Corral, aka the “Good as Gold Club” and God damn if the FAQ isn’t a veritable gold mine of plugger-tastic questions presumably frequently asked by pluggers everywhere, including:

Anyway, other than the oblique reference to a “birthday coupon” there’s no actual description on the site of what you get for being a Good as Gold Club member or why you’d want to join. I guess only true pluggers understand the value of selfless loyalty to a family-style chain restaurant brand. 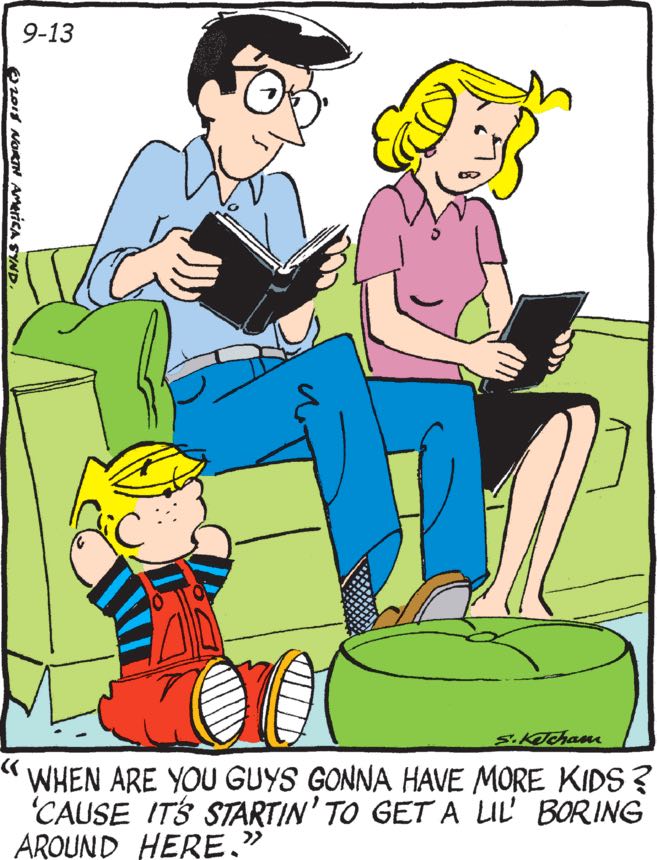 There’s been what’s to me a fairly noticeable shift in the Dennis the Menace art this week, accompanied by a change in signature from this:

To a more legible “S. Ketcham.” According to Wikipedia, “Hank Ketcham retired from the comic strip in 1994, turning over production of the strip to his assistants Ron Ferdinand and Marcus Hamilton. They continued it as a ‘zombie strip’ after Ketcham’s death in 2001, where the two, and since 2010, Scott Ketcham, continue the strip.” I guess the previous signature is a “Hamilton,” and even though Scott (Hank’s son) has been involved for eight years now, I assume he’s now … drawing it? Or something? I can’t find any other news about this online at the moment. Anyway, I doubt that this personnel change is going to lead to big changes like adding a new character to the strip, because you don’t run a cartoon for nearly 70 years because people like change, but just look at how horrified Alice is by the very thought of it! I’m not sure if her main worry is having another menacing offspring, or the process of childbirth, or just having sex with Henry again, but she’s definitely cringing in disgust at some combination of the three.

Now, I know everyone’s about to attack Toby for being cruel or heartless or whatever, but keep this in mind: you don’t spend the best years of your life married to Ian Cameron without occupying a great deal of your time calculating your loved ones’ remaining lifespan and figuring out the precise length of time one might be expected to mourn them when they finally, blessedly, die.