Without any aid or context, what do you think is happening in this cartoon, in which a devil and angel argue over whether an email (?) should be sent, with the “pro” argument being that the potential sender is bad and the “con” argument being that the recipient is good? Would you guess it’s about … cyberbullying? It is, because “Unity Day” is the signature event of National Bullying Prevention Month, and you can sort of work your way backwards to see what’s going on, but I think the whole to-do relies on the idea that bullies do their thing because of some innate sense of worthlessness, and while that may be true at some base level, I don’t think it’s the immediate motivation for individual acts of social cyber-aggression. Anyway, I guess this strip did its job in the sense that it was baffling enough to get me to look up what the hell “Unity Day” is, but that also led me to the sad discovery that nobody updated the Unity Day Wikipedia article with 2017’s events. Is it even happening this year? I’d do more work to find out, but I’m afraid someone might make fun of me. 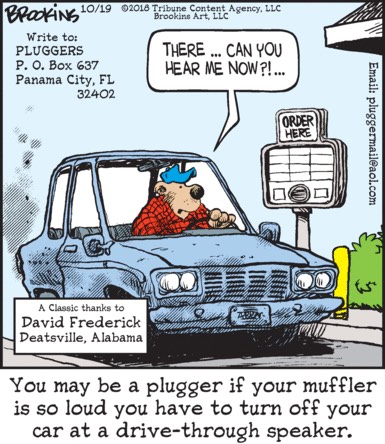 This failing car is doing its best to protect this plugger’s failing body. But the heart wants what it wants (specifically in this case, it wants to get clogged up with grease until it stops beating, forever).