[dramatic music sting] SHOCKING TWIST! But how can this be? Extremely Cool Motorcycle Guy has LONG HAIR and a MUSTACHE and STUBBLE??? How could such a ruffian be an ally of Mark Trail? I certainly hope that once we learn that the faction of Jose and Cool Motorcycle Guy was really being run by Mark from behind the scenes all along, and that Mark was happily using Rusty and Mara as bait to catch the artifact-nappers, our friend pulls off his wig and wipes off the fake facial hair to reveal the clean-shaven, crew-cut hero beneath the surface.

How can we tell that Dick Tracy takes place in a heightened, parallel world, similar in some ways to our own but fundamentally different from it? Well, one clue is that Dick Tracy and the Neo-Chicago Major Crimes Unit routinely kill suspects without due process and face no consequences for doing so some syndicated newspaper cartoonist launching a strip about a forgotten pair of movie heroes from fifty years ago is “dominating the entertainment news today.” 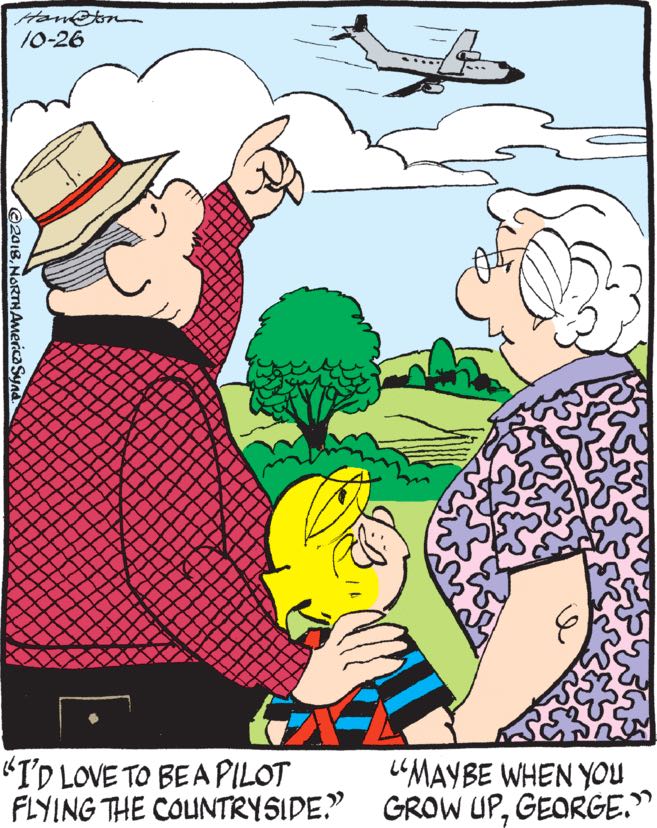 The weirdest part of this panel is the word “countryside?” Like, that’s not a huge plane, but it looks to be a twin-engine commuter jet, probably carrying at least 75 people, and while those planes often fly to airports that serve smaller cities, you’re not going to land it on some dirt airstrip in the middle of nowhere. Anyway, I guess the real menace here is that Dennis has slowly wormed his way into Mr. Wilson’s trust, until he gets the point of opening up with his innermost hopes and dreams, at which point his wife can belittle and humiliate him.