It’s a tough competition, but to my mind the legacy comic strip most aggressively out of touch with how young people talk, think, and act is Blondie. The creators of Snuffy Smith or Crock may know less about computers and social media and such, but at least they don’t build entire strips around their own perception of how those things work, revealing a mindset of mingled bafflement and contempt. Have you ever shouted the name of a popular viral video, which is of course the word “hashtag” followed by two largely nonsense words, to your fellow kid on the other end of a couch so that she can also consume and enjoy that content? Of course you have, this is an extremely relatable scenario.

Do you think that Toby knows that Mary is always narrating her exploits in such detail because she’s grooming her to take over as Charterstone’s meddler-in-chief once Mary passes on? As the incident Mary is describing indicates, she’s anything but subtle, but you have to take into account the fact that Toby is very dumb, so she might want to just come out and say it. 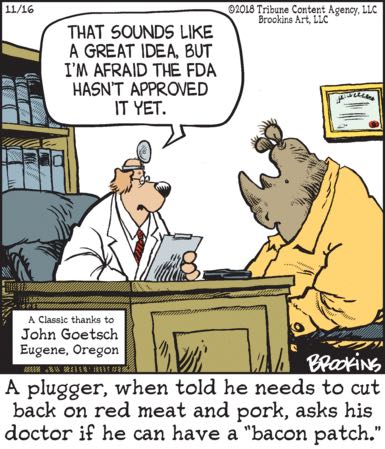 I’m really bummed about the cowardly “bacon patch” joke that’s been grafted onto this panel at the last minute, because I thought that, in “Rhino-Man volunteers to be a subject for dangerous experimental drug trials,” we finally had a Pluggers bleak enough to serve as a sequel to “Rhino-Man hocks his TV.”