As with most legacy comics, there are many strips in Blondie where the underlying vibe is that the kids today suck, but in today’s installment that seems to have become the “joke” itself. Millennials! You give them a promotion and they just want to party, with your money!!! Thank god the computer nerds will soon replace them all with robots, amiright??? It’s absolutely wild that Dagwood, for whom napping on the job is literally a solid 25% of shtick, is looking gobsmacked at the reader with a “can you believe it?” facial expression in the final panel.

So, yes, we’ve been having fun with the visual joke of “a fire hydrant is the dog equivalent of a toilet!” for, I dunno, probably the better part of a century, but … we all know that when dogs pee on things, they do it from, like, several inches away, right? They don’t touch the thing they pee on? So it doesn’t matter how cold the thing is? I know this is a weird question for Marvin, the most piss-obsessed strip there is, but: has anyone involved in the production of this comic actually seen a dog pee? 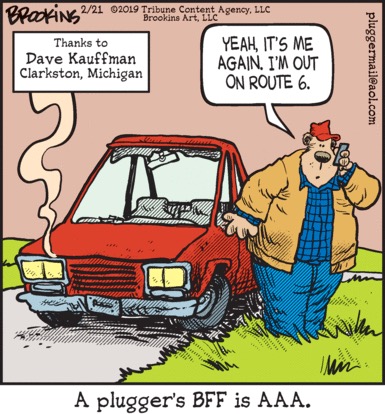 Pluggers’ cars break down all the time, and they don’t have any actual friends.