The thing I like so much about today’s Beetle Bailey is how furious Major Greenbrass looks as General Halftrack delivers the punchline. I have to assume that he saw Halftrack set up the sign on his desk and asked about it, only to have the general say he’d explain once they got on the course. “This?” the major’s face says. “I waited that entire car ride over for this?”

Man, say what you will about all the excrement and urine content Marvin puts us through, but at least we can be thankful that we weren’t subjected to Marvin’s parents talking about sex in what I’m quite sure was an extremely unpleasant manner. 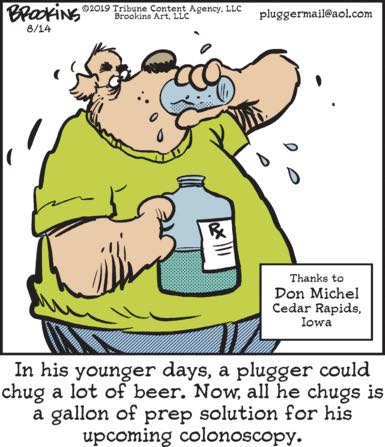 “Pluggers used to love getting smashed, but now they gotta let a doctor put a camera up their butthole to make sure they’re not dying” sure is a mood for the middle of the week, am I right, folks? Let’s all just sit quietly here for a moment, plugger and non-plugger alike, and think about what the future, or maybe even the present, has in store for us.