Sure, this seems like yet another Snuffy Smith where a forced bit of wordplay serves to remind us about how Hootin’ Holler doesn’t have the modern mores and problems of us flatlanders (frankly, if in the local dialect “trophy” can modify “wife” in such a way as to denote not that the wife is a trophy but rather possesses a trophy, Hootin’ Holler is clearly more isolated from the mainstream English-speaking world than I thought). But it also tells us something else important about the strip’s setting, which is that no institution in this lawless town can be counted on to hand out honors or benefits in a fair or meritocratic manner; rather, status is conferred by a combination of clan loyalty and open corruption. 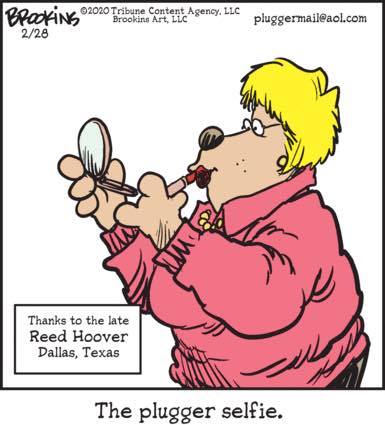 Sure, this seems like another panel informing us that pluggers are both different and possibly better than non-pluggers, in this case because instead of taking pictures of themselves that they think look attractive and posting them on social media, they look in the mirror to apply cosmetics in a way that they looks attractive before participating in social interactions in real life. But it also tells us something else important: that wildly prolific Pluggers contributor Reed Hoover maintains his dominance over this strip even from beyond the grave.