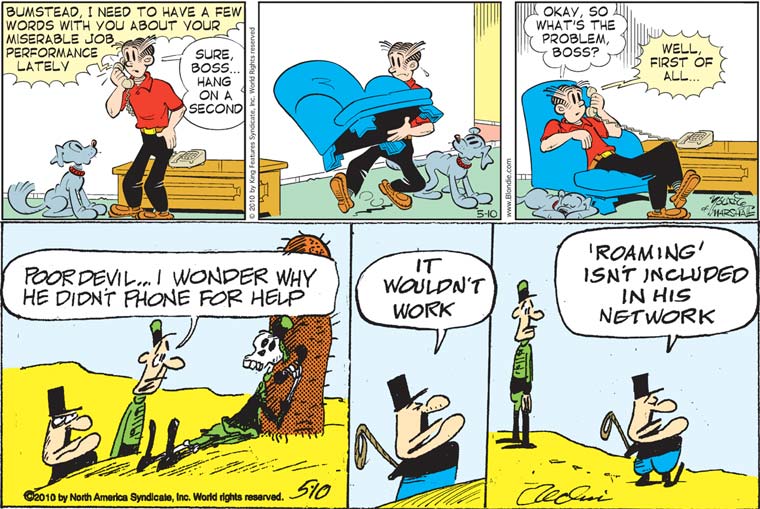 One of the defining features of legacy comic strips is of course their trapped-in-amber quality, which goes beyond just the characters’ archaic motivations and gender roles and goes right down to their homes’ decor. In fact, incidental details are even less likely to change than major points; Blondie might have started a business with much fanfare sometime in the ’90s, but the Bumsteads will apparently only have a single corded phone, sitting atop an early 20th century credenza in some out of-the-way location in the house, forever. (At least it’s a modern push-button model!) It’s such an ingrained part of the Blondie universe that I can’t decide if today’s strip is some kind of knowing wink to it, or just the logical extension of having the layout of chez Bumstead so burned into your brain that its anachronisms seems totally natural to you.

Crock, meanwhile, shockingly manages to be more in touch with modern reality today, in the sense that it acknowledges that phones untethered by wires do, in fact, exist. Of course, the strip artists seem to believe that you can create one merely by detaching the handset of a classic bakelite phone from its base, but hey, baby steps.

At long last, all distractions will be put aside and we’ll now enjoy unfettered A3G-girl-on-A3G-girl-on-A3G-girl action! Three will enter — how many will leave? I suppose this is supposed to be the first time Tommie has seen Margo since the latter’s spa vacation, but I prefer to believe that our redhead has taken to just groveling before Margo every time they encounter each other, to reduce the frequencies the beatings. “O Margo, our days were like nights without the warm glow of your sun! Please, do not remove your divine presence from us again, for we cannot stand the thought!” Meanwhile, Lu Ann has finally decided to face Margo’s tyranny head-on, the prospect of which fills Tommie with obvious terror. Lu Ann knows there’ll be bloodshed, which is why she’s prepared herself by putting on a butcher’s apron.

Sassy’s wide, haunted eyes in panel three don’t say “excited” to me so much as “my God, I’ve seen things no living thing should have to bear, and which you can’t even begin to imagine.” Oh, but we can imagine them, Sassy! We’ve seen panel two! 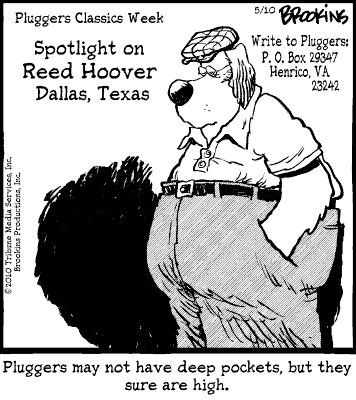 Longtime Pluggers readers know that Reed Hoover is a relentless, unstoppable Pluggers-idea-submitting machine, whose name pops up in this feature with unsettling regularity. Thus, it comes as no real surprise that the Chief Plugger has just given up and gone on vacation for a week and handed the strip over to some classic Hooverisms. Reed is no doubt celebrating pretty mightily down there in Dallas, presumably by hiking his pants all the way up to his nipples.