I admit that I’m fascinated with the way that comics use fire hydrants as just a visual signifier for “dogs peeing”. Like, most people know that dogs just pee … pretty much anywhere, right? They like vertical surfaces and like peeing where other dogs have peed, but in a pinch, they’ll just go wherever. Inside the house, or barracks, for instance, if nobody lets them out, despite their clear signals that they want to go outside. Weird the Sarge assumes “horny” or “hungry” but not “has to pee, the thing we all know dogs have to do several times a day.” I do kind of enjoy how big the hydrant is in Otto’s vision, almost filling the frame, as if when a human had to use the bathroom all they could visualize was an enormous toilet floating in an otherwise featureless void. 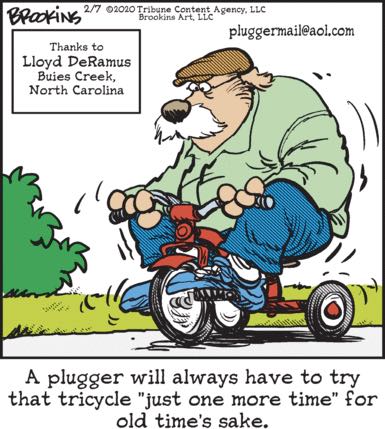 Welp, it finally happened: all the “pluggers are old/indulgent grandparents/the salt of the Earth/owners of crappy cars/better than city folks/hate and fear technology” suggestions have finally, finally run out, and all that’s left in the barrel is gibbering nonsense like this. I’m really looking forward to this new direction!