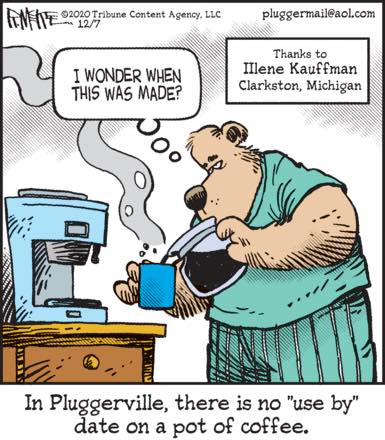 So before this year, I was never really a coffee guy, and my wife had her coffee when she got to the office. But I decided as a New Year’s resolution to find out if it would be better for me, anxiety-wise and not-consuming-massive-amounts-of-artificial-sweetener-wise, to have one cup of coffee in the morning rather than chain-drinking cans of Coke Zero all day, and a couple months later due to COVID my wife’s office moved from an office building in Koreatown to our dining room table, so now we both make coffee here in the morning, and we have different tastes in coffee (I like a lighter roast!) so we actually have a little one-cup coffee maker and we each make our own. I bring this up because I’m fascinated by the fact that all of us in this world have our own way of doing little things like this, and that makes me look at this plugger’s situation with some curiosity. Do some people just make a big multi-cup pot of coffee in their house and everyone drinks it continuously until it runs out? How many coffee drinkers are in the average plugger household, anyway? How long does coffee last in a pot, really? How many times can you reheat coffee and have it still be drinkable? I guess my real question is: my first impression looking at this comic was that this plugger stumbled downstairs in his underwear, hungover, he has no idea what time it is, maybe it’s the middle of the afternoon, who even knows, and he’s like, “did I make this coffee yesterday? last night, when I was drunk? did my wife make it this morning? did my wife leave me yet? I’m gonna need some coffee to figure this out”, and I really want to believe that that’s a passably realistic interpretation, you know?

You guys, I went to grad school with hopes of being an actual history professor because I used to have deep curiosity about historical questions. But today I read this and thought, “Huh, I wonder if Vikings actually had a taboo against cousin marriage” and I did a little Googling — like, very little Googling — like, just enough to find this explainer about Minnesota Vikings quarterback Kirk Cousins’s wife and this Tumblr post from 2014 from someone claiming to be an archaeologist who said that Viking cousin marriage wouldn’t have necessarily been the norm but wouldn’t have been frowned upon by anyone either, and you know what? I decided that was good enough for me! Either my brain is atrophying or I’m maturing, or maybe those are the same thing.