I refuse to believe that Beetle and Sarge are watching PBS or that Camp Swampy shells out for premium cable, so I’m left to assume that nobody at Walker-Browne Amalgamated Humor Industries LLC knows that you can pause streaming video.

“Did I think you looked goofy? Well, the two of us are, what, 40? 45? Not much older than that, surely, which means that when I saw you wearing bell-bottomed jeans it was the mid ’90s at the absolute earliest. So yes, I absolutely thought you looked goofy. Or wait, are you referring to JNCOs? Because those were exceptionally goofy.” 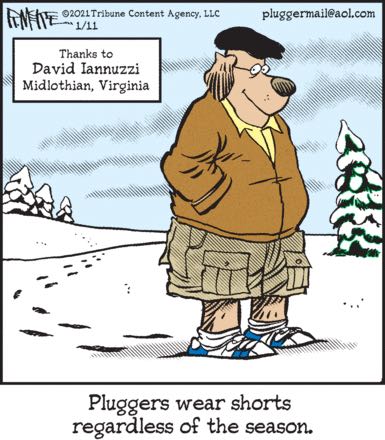 Speaking of the shift of cultural signifiers over time, I feel like either Pluggers or I have absolutely lost the thread. Wearing shorts when there’s snow on the ground, usually on a day where it’s unseasonably pleasant but still “cold” by any objective standard, is something I associate strongly with my college days and therefore Gen X generally, which means that [checks Wikipedia for generally accepted dates for beginning of Generation X, subtracts from 2020] oh my GOD no, no, please, absolutely not

143 replies to “Time keeps on slipping”