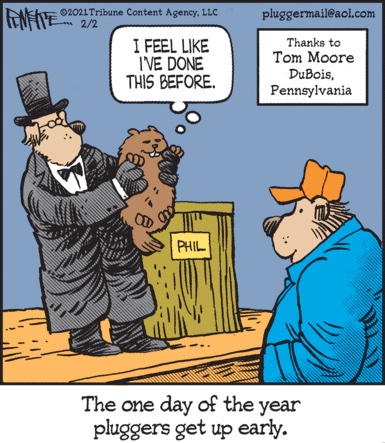 There is a surprising amount to unpack in today’s Pluggers! Let’s start with the idea that Groundhog Day is some kind of national plugger holiday, like the Oscars is for us coastal elites, and they get up early to catch all the shadow-seeing action on TV — or, if they live in DuBois, PA, a mere thirty minutes from Punxsutawney, drive to see the event in person. Then you have a thought balloon from the poor groundhog, indicating that he’s capable of sapience, which reaffirms all our worst fears about the blurry lines between “humans” and “animals” in the world of Pluggers. Finally, there’s the content of that thought ballon: Punxsutawney Phil feels like he’s done this before, implying that he’s stuck in the same hellish time loop that ensnared Bill Murray in the 1993 film Groundhog Day, only he doesn’t have access to the possibility of the redemptive love that freed Murray’s character. Real grim stuff! 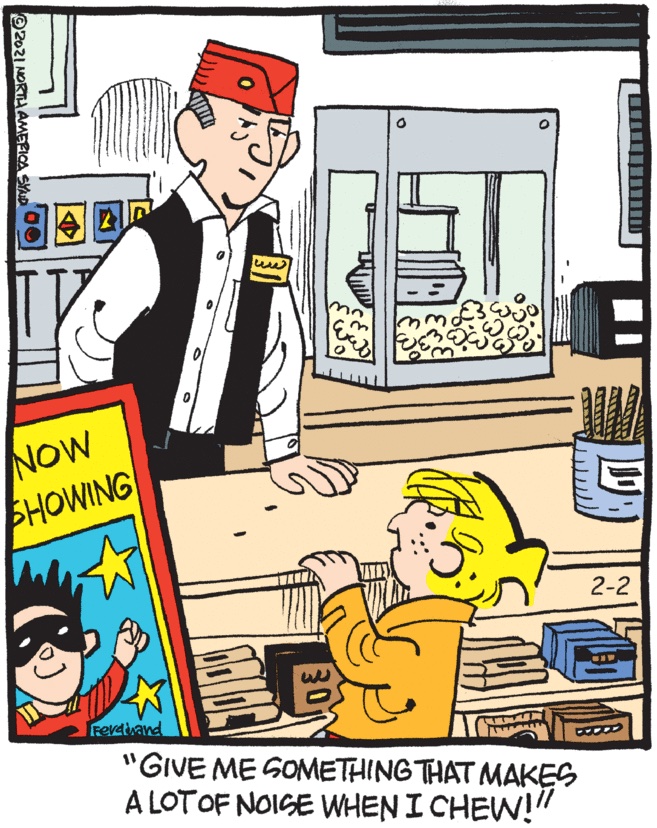 Not only does this panel feature Dennis engaging in actually menacing behavior — and with malice aforethought! it’s menace in the first degree! — but it also features a movie theater worker who isn’t some teenager who can laugh this off as a story to tell his buddies because fuck this stupid job anyway, but a man who looks like he’s in late middle age, probably lost his full-time job due to outsourcing or computers or apps, who can even keep track, and who took a minimum wage job to put food on the table, just while he’s looking for other work, just so he can keep a little dignity. But it’s hard, man. It’s hard to hold onto your dignity when they make you wear that hat, and it’s even hard when you have to deal with little shits like this. Real grim stuff!

Ha ha, it’s funny because … Hootin’ Holler, economically impoverished and physically isolated, has only one medical professional serving the community, and it turns out he’s a fraud? And nobody cares? I’ve said it before, but: real grim stuff!