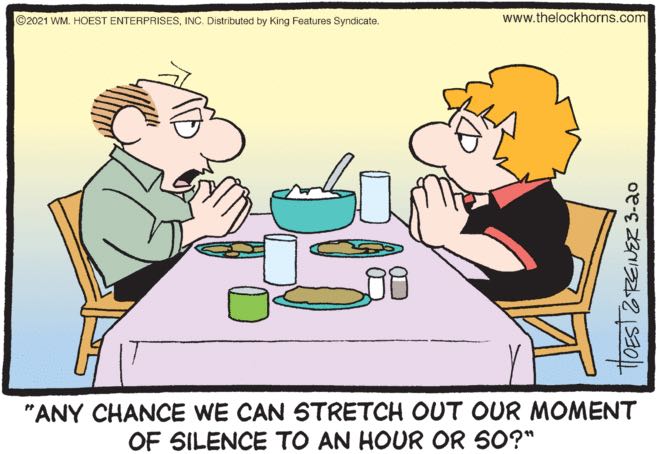 I’ve never really pegged the Lockhorns as a religious pair — the only evidence I can find of them going to church is for a wedding, which Leroy talked shit about. And really, can you blame them for spurning the promises of a spiritual life? Think about how incongruous the thought of them praying before meals to whatever Creator has condemned them to their current existence: locked together forever in a semi-featureless void, never aging, never feeling more warmly towards one another, no way out. Surely their daily moment of silence is spent in fuming, inchoate rage — at their Tormentor above, for once, rather than at one another!

The little detail I love in this strip is the big smile on the bartender’s face. You’d think he’d be bummed that Sarge’s little joke is going to result in lower sales, tips, and goodwill in the bar tonight, but maybe he’s just a dedicated fan of cruel pranks.

Is … is “nose tissue” a thing people say? Maybe it is in the Marvinverse, where everyone thinks about pooping constantly, and wants to make absolutely sure you know that, for once, they aren’t talking about the other kind of widely used tissue paper (the kind for wiping poop off your butthole). Can you imagine if some of that tissue ended up in the washer! Ha ha! It would be extremely vile, and will also be the subject of next week’s Marvin.