Good news, everyone! The library fight in Gil Thorp has ended in a classic “We’re not so different, you and I” situation, in which Abel wants to cut government funding from public services and Zane wants public services to pivot to profit-making ventures. Surely there’s some beautiful synergy to be had there! Hey, you’re probably wondering why library workers tend to be such stick in the muds about patrons eating or drinking in the library, and as a former library worker I can tell you that it is 100% because food attracts bugs and mice and bugs and mice eat books. Just putting that out there! Anyway, the important thing is that Zane has defeated Kathy’s dad in the marketplace of ideas, and that has Kathy all hornt up, which means that natural balance has been restored to the universe. 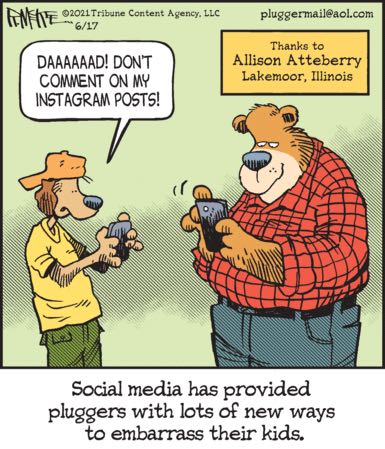 My sympathy is with this poor dog-child. Can you imagine a plugger leaving comments on your social media posts? While making that facial expression? Truly chilling.