I guess what’s going on here is that each of the Coaches Thorp is sitting with their own student-athlete in the teen vs. teen’s girlfriend’s dad library board interview competition, and “we’re all rooting for the library” is some kind of statement of neutrality, like “We may disagree on the details but I’m sure whoever wins will do a great job for this institution that we all respect, so let’s all just go out there do our best.” That’d be a lot more believable if Katy’s dad’s whole platform wasn’t literally defunding the library. Anyway, I assume that weird hand position in panel three is Coach Mrs. Coach Thorp getting ready to throw up some really exaggerated chef’s kiss gestures when Katy’s dad loses. 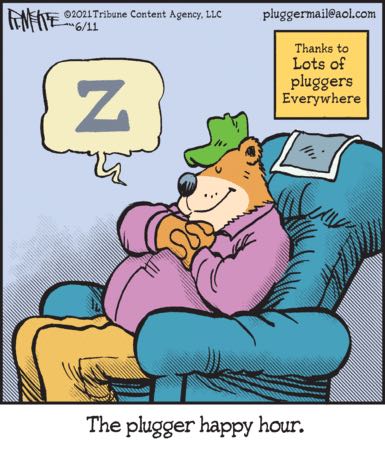 You know what hour a plugger is happiest? When they manage to doze off, their troubles and cares briefly annihilated by blessed unconsciousness. It’s only an hour, though, when they pass out in their chair from pure exhaustion; presumably they spend the night tossing and turning in bed due to their various anxieties and disappointments. “Lots of pluggers everywhere” wrote in with this one!

God damn it, Ashlee, don’t you dare go soft on me, returning sad Drew’s precious Rolex from his dead mom! The only acceptable thing happening here is that you’ve realized the Coreys have generational wealth and you need to be working on a much more ambitious grift.