A few weeks ago, faithful reader Tabby Lavalamp raised questions in a COTW runner up about why the notoriously heard-hearted Shoe would accompany the Perfesser on a tender-hearted errand. It stuck with me and was definitely the first thing I thought about today, as Shoe has not only accompanied his employee to the latter’s uncle’s grave (signs of multigenerational newphewism?), but has brought a bouquet of flowers along as well. Anyway, the reason Shoe actually goes along on these trips is that there needs to be another bird-person present so that the exchange of dialogue that creates these joke-like utterances can happen, but today’s strip did make me wonder if he’s actually there as part of his journalistic mission. There isn’t a lot of news in Treetops and anything sensational could make a good story that would get people sharing links to treetopstattler.bird on Facebook, and he’s always had a gut feeling that there was more to this uncle business. So the guy died in some unexpected and perhaps shocking way due to a terrible mistake he made, huh? Sounds interesting. Putting that gruesome tale into the newspaper might be a cruel thing to do one of the paper’s longest-suffering employees, but don’t let the flowers fool you: Shoe’s no softie. 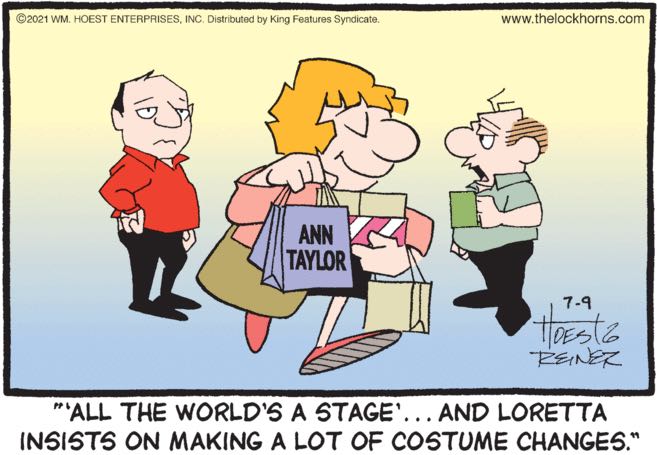 Meanwhile, it looks like the Lockhorns’s Featured Brands program is off to a great start! Congrats to Ann Taylor for partnering with this universally beloved feature, which is bound to portray their brand in a positive light!