Oh, did I tell you about the Dick Tracy plot where Mysta Chimera was working with Vera Alldid, a cartoonist who does an in-universe comic strip called J. Straightedge Trustworthy that’s clearly based on/parodying Dick Tracy’s life, and Mysta was supposed to be promoting some cartoon thing but also Vera was sexually harassing her nonstop, but now they’ve both been kidnapped by some guy with a magic science ring that suppresses Mysta’s powers? Well, if I didn’t, I guess I just did in that previous sentence, so here we are! Anyway, I just want to point out that only when he learned his comic is in reruns now did Alldid truly break down into despair, which maybe says a little too much about the comic artist mindset. They’ve been running reruns of Crock for literally years and nobody seems to notice! You think they’re ever going to pay Vera again if this goes on for too long? 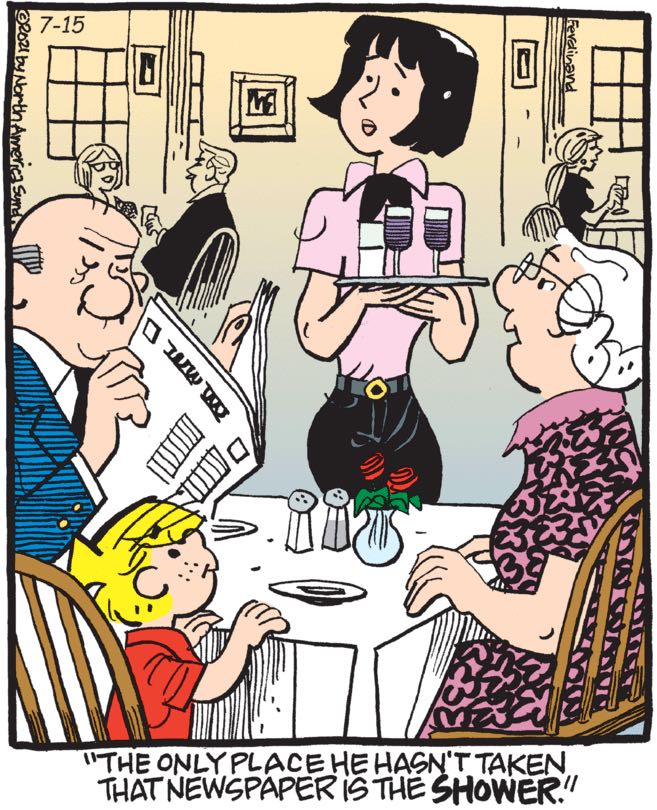 Hmm, it looks like Dennis’s mysterious road trip with the Wilsons is still ongoing! Mr. Wilson is, of course, scouring the local paper to make sure no reports of a missing young boy have reached this town, far away from the leafy suburb where the Mitchells and Wilsons live. (Obviously no such reports have made it into the paper, because Henry and Alice have absolutely not bothered to tell anybody their child is missing.)