Well, Libby sure didn’t ask for this war, but it seems she is determined to win it. We have every confidence that she will, of course. Mostly, I’m curious where Estelle is in all this. I think we can all agree that her defense of her cat has been somewhat half-hearted. Still, take a look at her facial expression as she goes to town on that rib: 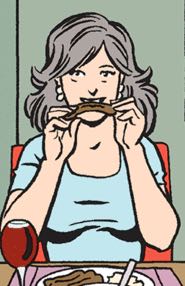 Either she’s very pleased at the thought of two living beings fighting over her, or she’s glad that Libby will do what she can’t bring herself to do (expel Wilbur from her house, and her life, forever). I will also note that she has really filled that wine glass up to the rim, so clearly she’s expecting quite a show tonight.

The sartorial choices of long-established Crock characters have at least some basis in reality: Maggot is wearing a miscolored but otherwise recognizable version of the kepi worn by members of the French Foreign Legion, while Grossie is similarly wearing a basically correct version of a niqab (a form of dress actually banned in Algeria today, but never mind that). But things get more dire when the strip needs to introduce somebody new. Like this lady, who’s coming to collect charity items: she’s a … witch? She’s wearing a witch’s hat? But she’s collecting stuff for charity, so she’s a good witch? I guess?