Guys, look. I never wanted to have a non-trivial percentage of my waking hours haunted by thoughts of what caused the marriage of the Daddy Daze daddy and the Daddy Daze mommy to unravel. I didn’t ask for this life. And yet here we are! This pair had this baby, who is … well, I’m still not entirely certain how old the Daddy Daze baby is supposed to be, but he literally can be cupped in one of the Daddy Daze daddy’s hands, so he can’t be that old, and so they were clearly together (or at least “together,” nudge wink) not that long ago! And obviously they’re modeling a good amicable post-divorce co-parenting situation for the readers at home, but I for one am not buying it! What’s the drama here? Does the Daddy Daze daddy want to get back together with the Daddy Daze mommy? Today’s strip certainly points in that direction, in my opinion! Does this mean the whole thing where he purports to interpret his infant son’s babbling as coherent language is nothing more than a bit to amuse his ex and maybe, maybe, worm his way back into her heart? I had always assumed that this ongoing pantomime got its start when some combination of loneliness and sleep deprivation had simply shattered his mind, but this is quite frankly an even more depressing and pathetic explanation. 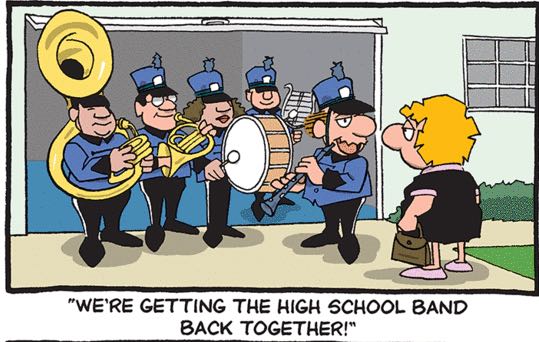 This is actually a decent joke, but I frankly don’t think it fits Leroy’s character very well. I refuse to believe that even in high school he was either earnest enough to join the marching band or socially skilled enough to make friends.

165 replies to “Leroy as a clarinetist? So wrong it’s right”