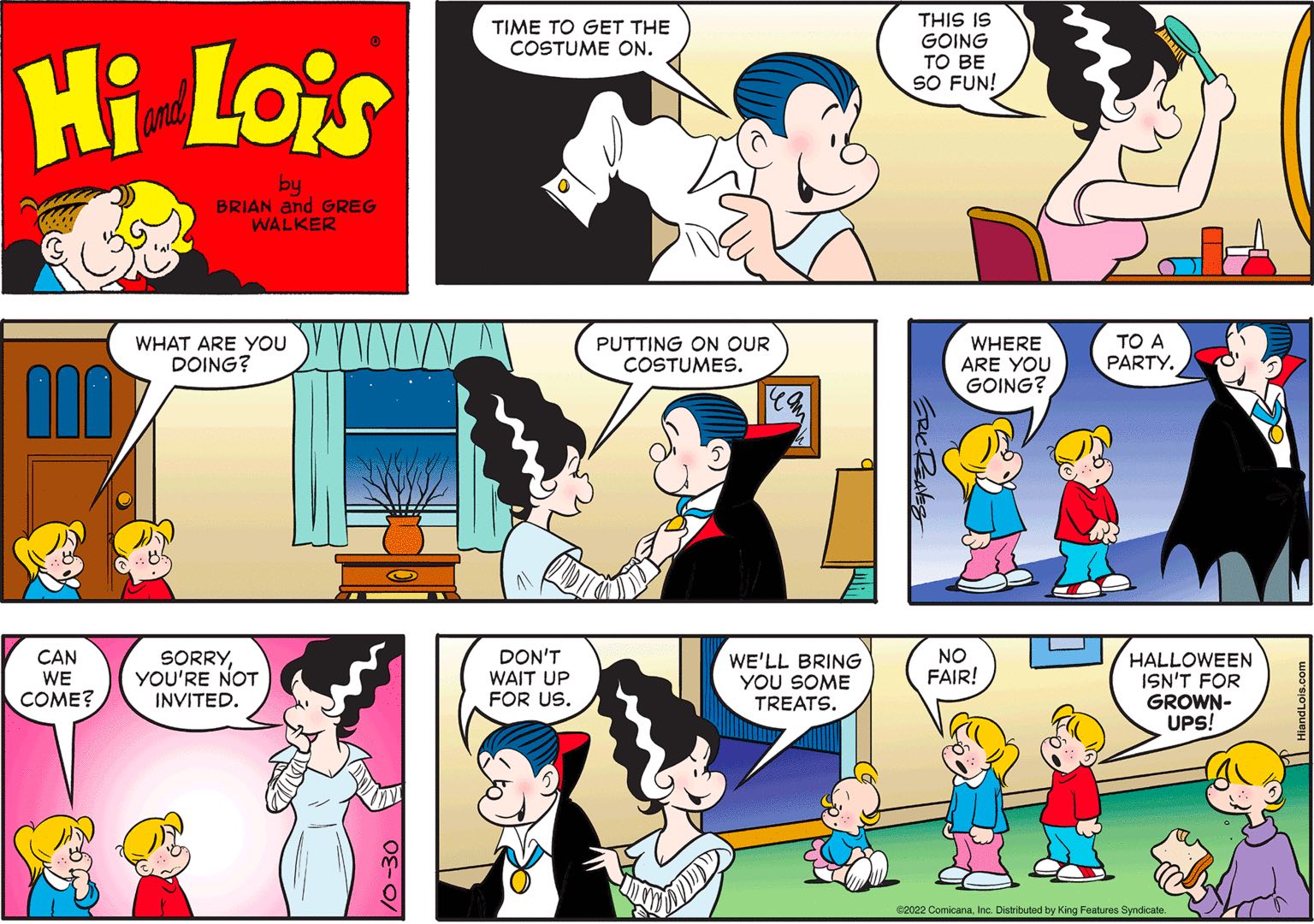 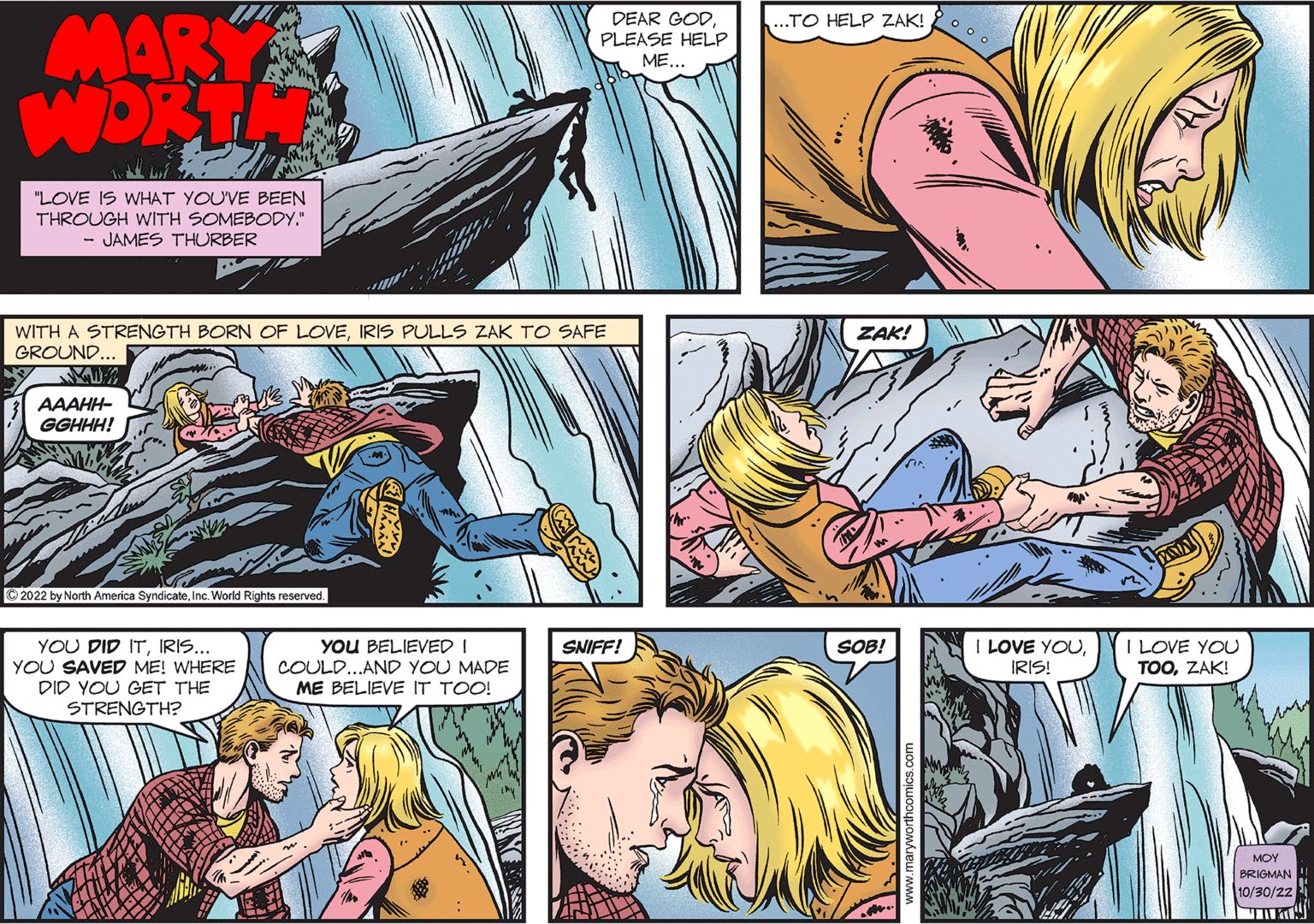 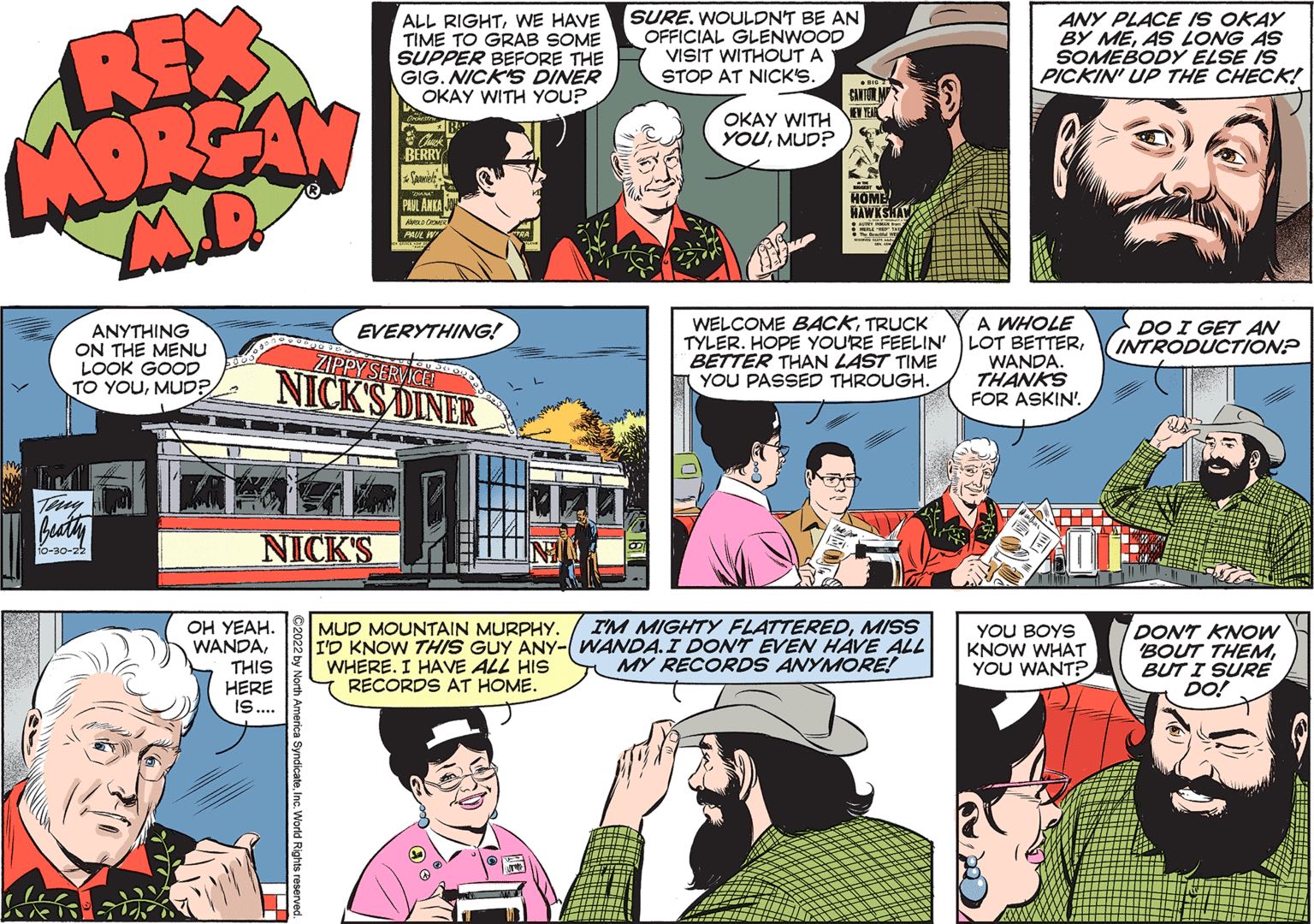 A fun fact is that the Major League Baseball postseason expanded to a multi-round playoff format in 1969, and there’s no timeline where Hi and Lois are middle-aged parents of a teen and infant in the year 2022 but they were also alive then, which means that Lois is engaging in some nostalgia for a constructed past she can’t even personally remember. “Oh, I wish I lived back in the 1950s or ’60s, when men paid attention to their wives instead of dumb old sports!” she thinks, in one of the most impressively delusional episodes I’ve seen in a syndicated newspaper comic strip.

Gasoline Alley has spent weeks now, like genuine weeks, my God it’s gone on forever, on this boogie-woogie piano guy, and I get the feeling that he’s a real person or closely based one, but honestly I cannot summon the energy to figure out who. Anyway, as the one strip I deigned to share with you should indicate, his whole deal is about how playing music is a fun, joyful activity for everyone! Thank goodness Rufus and Joel are here to remind you that the real world of music is brutal and violent, and no place for children or the weak.

LOOK THIS BABY DOES NOT KNOW WORDS, LET ALONE LETTERS. HE IS NOT MAKING UP NEW LETTERS. HE JUST ISN’T.

I REFUSE TO PARTICIPATE IN THIS CHARADE ANY LONGER. GOOD DAY TO YOU ALL

Look, I don’t want to dwell on the technical details here, which seem to be based on the misconception that “well you look at Instagram on your phone so your account must be on your phone somewhere.” I instead want to engage with this strip on a narrative level. What exactly is the dangerous stalker planning to do with Elmo’s account? Post declarations of love from him to her? Send poison pen DMs to his friends and her potential romantic rivals? This is a significant escalation from snarky emojis and honestly he should be telling his parents about it, not some random unrelated neighbor-adult who sees the story primarily as being about the Kids Today, Who Are Not As Good As We Were When We Were Kids.

Wait, did we know that the Daddy Daze daddy’s goth friend’s son was a teen? This is really opening up a lot of fun possibilities, honestly. I can’t decide if this kid is himself a goth, like a mini-me version of his dad, or instead has gone full on jock or preppie, as an act of defiance. Anyway, check out panel four here, where the dude has decided that blinding himself with scalding hot coffee is the logical next step in his story.

Absolutely love that Hi has decided to rebel against the total overload we’re facing in the age of Too Much Streaming Content by engaging with the world as he assumes our primitive ancestors did: by reading a print magazine about golf. It’s clear from his facial expression that it didn’t work, but I’m proud of him for making the attempt.