I know I often slag on Six Chix for doing strips that are opaque, baffling nonsense, so here’s a change of pace: today’s strip is opaque, baffling nonsense and I love it! Ha ha, she’s like a dog walker … but for wigs! I think what really makes it for me is that the wigs are on fake wig heads (not sure what the correct term for this is and not looking it up), which are in turn on wheels, because that’s the only way this absurd scenario would even vaguely work. Anyway, A+ work, Six Chix, please keep up to good kind of opaque, baffling nonsense, as opposed to the bad kind, which I will definitely let you know about if you slip up and do it again.

I guess it shouldn’t be a surprise that the sort of person who has a comics blog is also the sort of person who would get thrown into a tizzy by the revelation that Rex Morgan’s sons are going to kindergarten, but I definitely was thrown into said tizzy, because Rex and June’s sons are babies, right? But that said, the Morgans stole June’s dying best friend’s son in late 2017, when he and their non-stolen biological son were about a year old, so that would make them about kindergarten age now, assuming the Morgans age in real time, which they absolutely 100% do not. The last thing we want is this thing turning in For Better Or For Worse or something. And if Sarah was like five or six when the boys came on the scene, that would make her about 10 now, which is trembling on the precipice of very bad things. Do we want Sarah as a tween? Sarah hitting puberty? This strip needs to step back from the brink now, before somebody gets hurt. 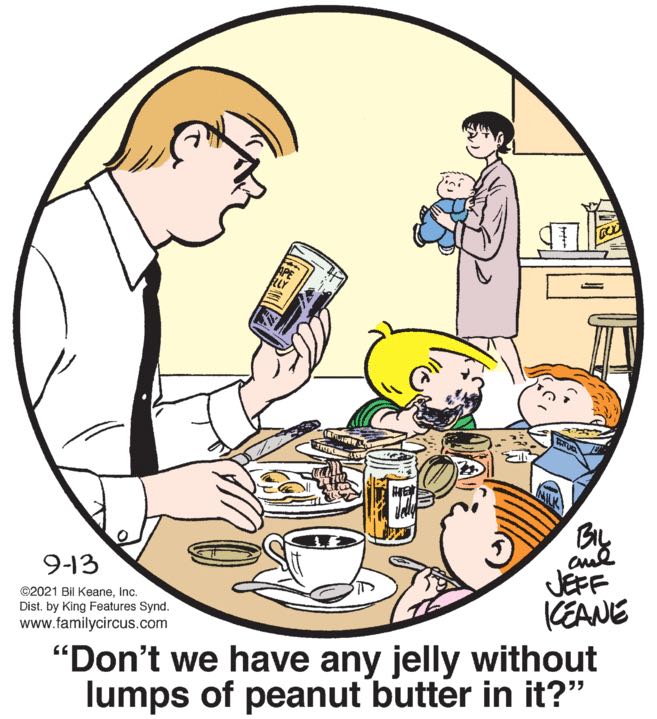 Not sure whose facial expressions I like better here: Ma Keane’s (“Ha ha, we do not have any jelly without peanut butter in it and that’s very gross, ha ha ha!!!”) or Billy and Jeffy’s (“What, does this dipshit think he’s the King of England or something?”).