A strip like Blondie exists in a sort of eternal present, its world changing almost imperceptibly slowly over time to stay vaguely contemporary, so it doesn’t really have any fixed “lore” per se. But still, I feel like we’re getting a lot of information here that has no foundation in previous strips. Alexander is a musician? Alexander has friends? The Bumsteads have a vast empty room adjacent to their living room that can be turned into an impromptu stage for Alexander and the friends he seems to have suddenly acquired? At least this all is in the service of a really solid joke, about Alexander’s band playing a tribute (???) to concert crowds everywhere (????) although not here because they’re just playing in the Bumsteads’ house, for his parents. This punchline is both conceptually airtight and very funny, and I enjoyed it a lot. 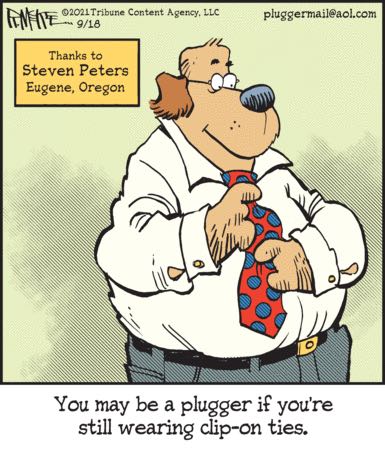 You may be a plugger if you’re still wearing clip-on ties. May! We’re not really sure. Despite this strip being named Pluggers, we’ve kind of lost the thread on what pluggers’ whole deal is and we don’t want to say anything we can’t take back. Will this offend pluggers? Non-pluggers? Clip-on tie wearers? Clip-on tie shunners? People who used to wear clip-on ties but stopped for some reason? Please don’t get mad at us!