God damn, look at him. Look at that adorable little smooshed face! Obviously I’m not talking about Wilbur, obviously, how dare you, I’m talking about Pierre, and yes I am going to imagine his internal monologue in a hilarious French accent, and I urge you to do the same as you read the following aloud: 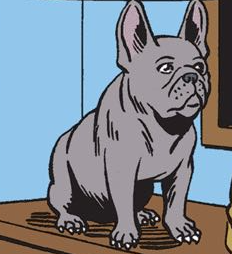 “Mon dieu, is zees the man who will be taking me home from zis shelter? Does he plan to make another child out of me, as a, how-you-say, substitute for his absent daughter? I am weeling to give zis a chance, because I believe he will be dropping many items of food on the floor where I can reach them, but I shall remain vigilant for trouble!”

Ahh, Pierre! Your Gallic detachment and stoicism will get you through the next few troubled months, hopefully!

“So whaddya say? Wanna give her another li’l bonkus on the old conkus? Another round of mind-wiping? She’ll probably be fine, and then we can keep all the money from the Kitty Cop book that she won’t remember!”

Huh, so you’re saying you want to spend … more time with your husband? Wouldn’t have been my call, I’ll say that.