Say, remember a few weeks ago, when Dick seemed to grudgingly agree that a free press is an important element in society and gave an interview to some lady from a newspaper? Well, surprise: that lady was a criminal, and Dick, who’s never forgotten a single misshapen criminal skull he’s laid eyes on, knew it at the time, but gave her the benefit of the doubt. Too bad, because it looks like she doesn’t even work for the fake news after all! Wait, does not working for the fake news make her better or worse? Either way, I’m sure Dick is regretting not shooting her while she was trying to escape from the interview.

I’m a strong believer in the Occam’s Joke Razor, by which I mean that when it comes to setup material, entities should not be multiplied beyond necessity. However, this should be balanced against the Law of Joke Specificity, which says that specific things are more funny the vague ones. Take today’s Shoe, for example. To set up the punchline, the lady bird needs to say she has a particular dream job, because it wouldn’t make a ton of sense otherwise; but the strip goes so specific, having her claim she wants to work at an English department store that went out of business in 2006, that you sort of expect that to feed into the punchline, when it really doesn’t. That said, I do enjoy the loving way the Perfesser is gazing into his beer glass in the second panel. I think we know what he is doing in his dreams when he’s not working, ha ha! (He’s getting bombed in the middle of the afternoon.) 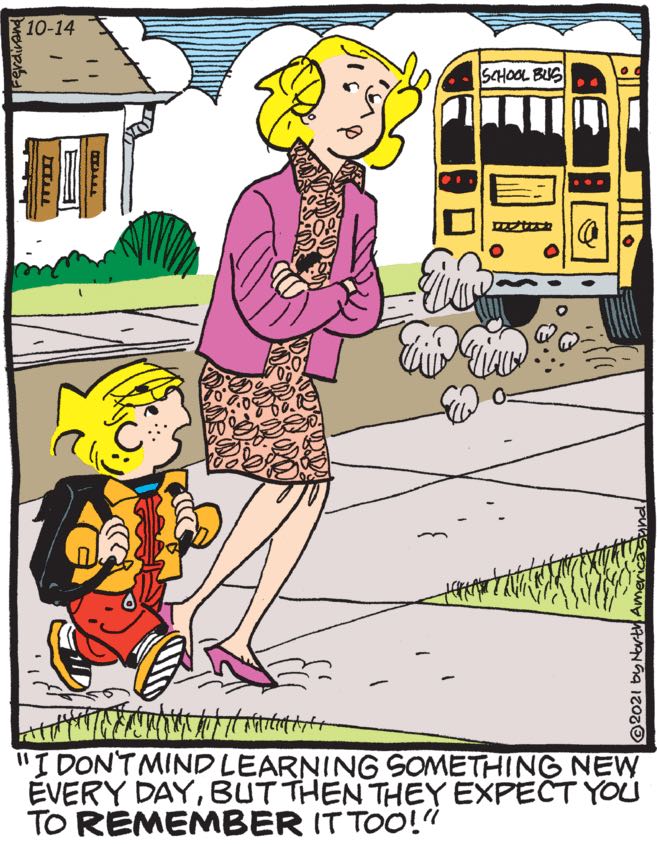 Speaking of facial expressions, I am absolutely loving Alice’s face and body language here. This is the moment when she realizes that Dennis is never going to become a functional enough person to move out of the house, and she is not OK with it!

Speaking of facial expressions, I’m interpreting Libby’s here as one of grim determination. She’s not sure how many more piece of furniture she’ll need to piss on to break Estelle of the Wilbur habit once and for all, but she’s willing to do whatever it takes.