Oh, boy, the basketball season storyline of Gil Thorp is already more promising than this fall’s snoozefest because it looks like it’s going to do one of my favorite Gil Thorp things: grapple with a Very Serious Social Issue! Remember back in 2009, when we learned that “‘sexting’ is a serious problem” that’s “been in Time and Newsweek“? Remember how the strip’s version of sexting was “a girl wearing a an extremely non-revealing bikini made out of soda cartons?” Anyway, I’m assuming that sportsduke dot com is the Thorpiverse analog to the sports betting site draftkings dot com, which has gone mainstream now that the Supreme Court said sports betting is A-OK a few years back, and Pranit is about to come down with a Serious Gambling Problem. Or maybe he’s going to make a bunch of money and then start acting as a bookie for his little friends! Maybe Milford athletes are going to bet on games they’re playing in! I demand maximum drama, darn it!! 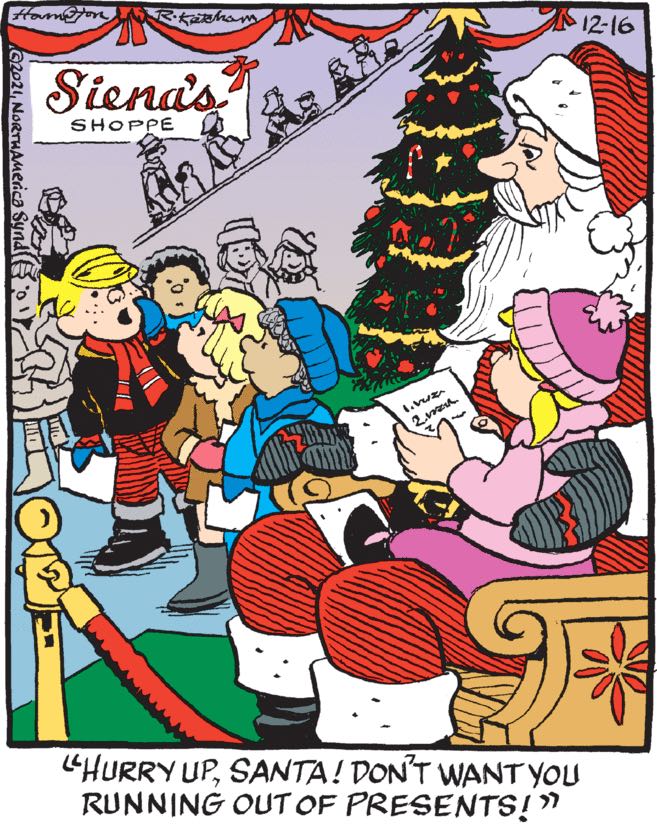 I’m going to give Dennis the benefit of the doubt here: the way he’s cupping his hand next to his mouth is a little too theatrical for this to be an entirely sincere expression of anxiety, which is good because it’s frankly the sort of thing we’d expect from Jeffy Keane. No, I’m guessing that Dennis is trying to start some kind of mass panic among the children, either out of a simple desire to stir up shit or because he has devious schemes in play that will be furthered by a scene of screaming chaos. At any rate, I tentatively deem this to be adequately menacing.

Wow, look at Tater and Jughaid, eating their cookies off plates like little liberal fancy boys! Snuffy is modeling the only way a real man eats: just letting your jaw hang slack and your tongue loll out grotesquely so you can shove the whole cookie in at once.