Guys, I was about to go on a whole smug riff here about how the idea of a “bucket list” — that is, a list of things to do before you “kick the bucket” (i.e., die) — really hit its cultural peak back when the movie of the same title came out in 2007, which is why it’s telling and sad that Walker-Browne Amalgamated Humor Industries LLC is only now getting around to making “bucket list” jokes. However, my total commitment to serving up accurate, information to you, the reader, led me to fact check some things and learn some truly mind-blowing stuff.

First off: Far from being a common phrase that was then borrowed as the title of the movie, as I had very strongly assumed, the phrase was actually originally coined by the screenwriter, Justin Zackham, who says he had kept a list like that for himself that he called “List of Things to do Before I Kick the Bucket,” eventually shortened to “Justin’s Bucket List.” Linguist, Wall Street Journal language columnist, and friend of the blog Ben Zimmer wrote a in 2015 column in which he backs Zackham’s claims; somewhat amusingly, a 2011 Slate article written to debunk the idea has an editorial note at the top added in 2015 admitting that they either misinterpreted or misdated supposedly earlier uses of the phrase. This extremely well-documented Reddit comment in a discussion on the topic in /r/etymology does a great job of demonstrating that the phrase was either invented for the movie or was almost unknown at the time it was released, because there are lots of earlier references to the concept but none actually use the phrase (they usually call it a “life list”).

And it’s not just me, a Gen Xer who was a married adult in his early 30s and had been doing this comics blog for three years when the movie came out, whose mind was blown by this: apparently it has similarly blown the minds of all the teens on TikTok, where discourse on the subject went viral last month. Did I know this? Obviously not, I am an old person who, as noted, was fully adult in the year of our lord 2007, I have not downloaded the TikTok app to my phone and I never will, thank you ver much. As the research journey outlined here has made clear, I only got hepped to this whole scene by — that’s right — the comic strip Beetle Bailey. THE WALKER-BROWNE STRIPS ARE MORE HIP TO WHAT THE KIDS ARE TALKING ABOUT THAN I AM, IT DOES NOT MATTER THAT I HAVE MANY ITEMS UNFINISHED ON MY “BUCKET LIST” BECAUSE I AM CLEARLY DEAD AND ALREADY IN THE GRAVE

Speaking of teens, the “Pranit accidentally becomes a bookie” plot ended super boringly (Pranit got narced on and suspended from the team but otherwise seems to be doing fine and learning the appropriate lessons), so I appreciate the fact that today the strip decided to “have a little fun” and just provide some unsettling closeups of food. You ever wonder what it would look like for a hamburger to be pointed at — form the hamburger’s point of view? Then today’s Gil Thorp is for you, friends. 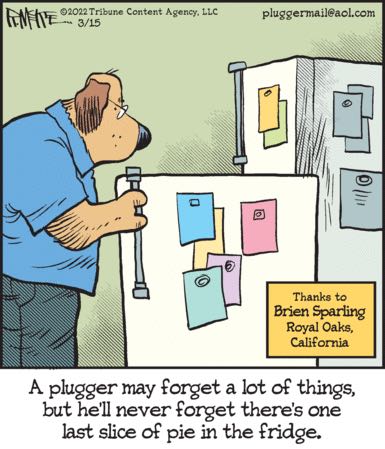 A lot of comics did “Pi Day” jokes for 3/14 yesterday, and I ignored them because, as a dork who went to a magnet high school with an engineering focus, I can assure you that I have heard enough of those jokes to last me a lifetime. (Get at me when you’re ready to get on my level and celebrate Mole Day.) I guess today’s Pluggers is supposed to be a saying “I may have forgotten to do a Pi Day joke yesterday but every day is pie day, when you think about it”, but honestly I can’t get over how completely joyless this dog-man’s face is as he looks into the fridge. Pluggers are just simple, down-home real Americans who long ago lost the ability to feel pleasure or anything at all, really, even when they see that there’s a delicious slice of pie for them to eat whenever they want.