Sorry, I know Blondie loves nothing more than mash together their characters’ extremely broadly defined character traits with whatever “topical content” they can think of, but I have to call bullshit on this one. Sure, Dagwood Bumstead 1.0, the wealthy, dissolute failson, would’ve hopped on the Panama Limited in Chicago and turned his Pullman Car into an impromptu speakeasy before rolling into New Orleans the next morning, then spent the next week in a gin and ether haze throwing beads at flappers. But 2022 Dagwood Bumstead is a smug, polo-shirt wearing suburbanite who doesn’t spend any time in whatever city his suburb is next to and he absolutely isn’t going to some gross place like New Orleans where he might see poor people enjoying themselves in an uncouth manner. I suppose it’s possible he used the request to get Mr. Dithers to “compromise” on letting him dress like a jackass at work, but I honestly don’t think Dithers needs much prompting to let Dagwood embarrass himself in public.

Cal and Toby’s frisbee banter is very weird, as they’re repeatedly complimenting each other on their skills at an extremely simple pastime for children. I’m wondering if Cal is supposed to be an Ultimate Frisbee player, which is somewhat more difficult, but the syndicate made them take out “Ultimate” because it wasn’t relatable or maybe was trademarked, and then the artist interpreted the resulting dialogue by having these two just hurling a frisbee at each other with maximum force from like two feet away. 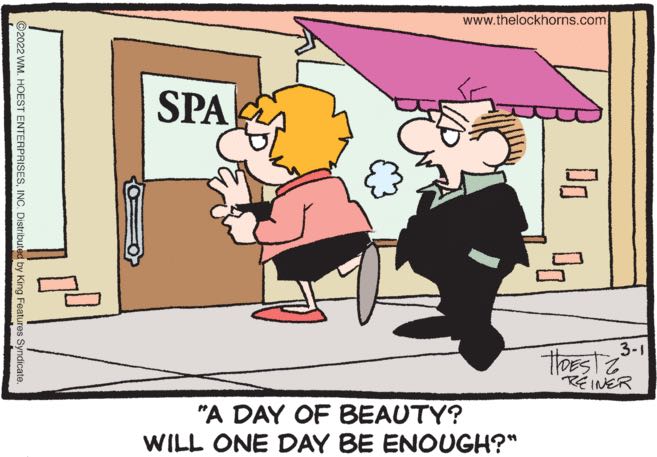 Gotta love the little puff of breath in front of Leroy, telling you this is a cold day. He could’ve stayed home, or in the car, but he braved the chill to follow Loretta right up to the door of the spa so he could lob this little poison dart at her at the very last minute and ensure that the entire experience was ruined for her.