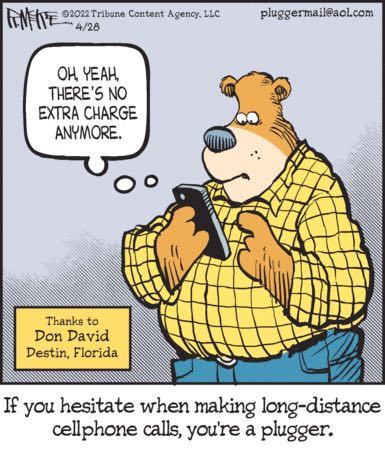 One of the most controversial takes I’ve ever unleashed on Twitter is that the Lockhorns are Millennials. Conversely, reporting that pluggers are almost certainly now Gen X makes my 1974-born heart heavy, but I don’t think I’m really going to get any pushback on that, and it’s true that I’m probably among the lower end of the age range that actually had to worry about paying a long distance bill. Speaking of pluggers and phone stuff, a thing that wife and I constantly chuckle about is that her dad moved to a new city a while ago — several years ago, but, you know, well into the era when nobody pays for long distance anymore — and even though he had a perfectly good phone cell phone number, he jumped through all the hoops to get a new number with his new local area code, which strikes me as something that would work for Pluggers, maybe? I don’t really have a punchline here, I’m just pitching a Pluggers idea, which makes sense because I’m Gen X, like, as noted, most pluggers are.

Ian Cameron is also probably supposed to be Gen X, but he’s no plugger! He put on a suit and tie to go loom menacingly in the shadowy doorway of his ex’s (?) office (?) like he’s in some German expressionist film because that’s the kind of classy and sophisticated man he is. Are he and Helen going to kiss? I sure hope so! I sure hope he maintains that glowering facial expression throughout the entire process, too!