Folks, your comment of the week in a moment, but first: faithful reader Paul sent me some scans of an old Blondie comic book — did you know there used to be Blondie comics books? did you know there were a series of 28 Blondie motion pictures? — that answered one of my long-standing questions: why is Elmo hanging out with Dagwoold all the time? 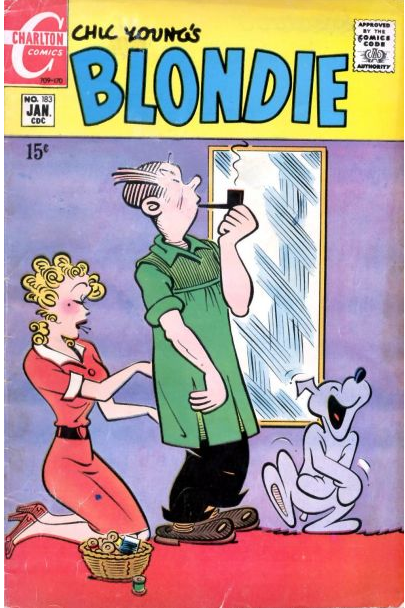 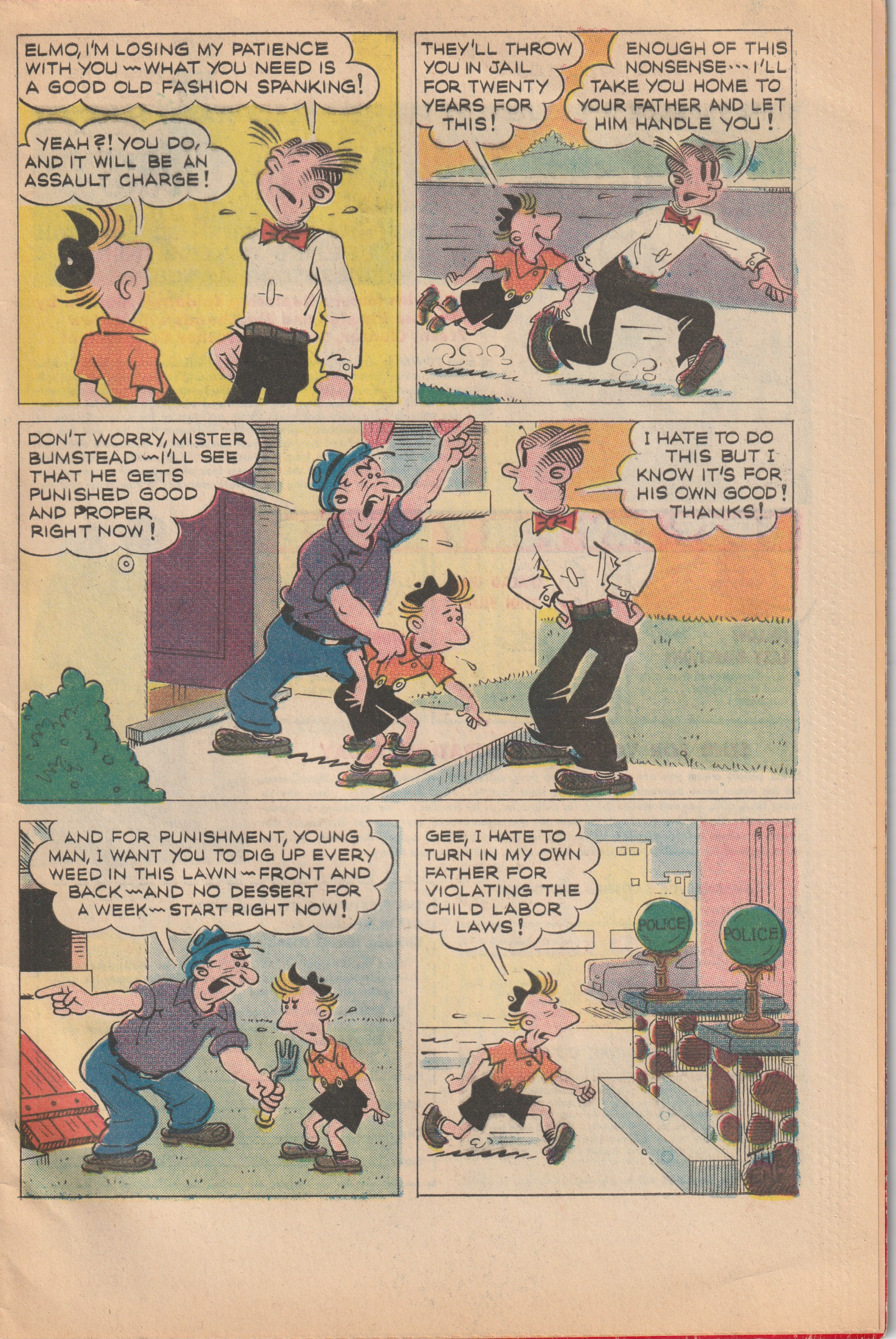 There you have it: Elmo is hanging around with Dagwood all the time because his own father is in jail (Elmo put him there).

With that out of the way, here’s your comment … of the week!

“Robert John Burck, the Times Square Naked Cowboy, was truly the best of us. It only makes sense that he would be one of the last freedom fighters left to face the end of all things. RAGE AGAINST THE DYING OF THE LIGHT, SWEET PRINCE!” –Dunkelcopter

“Does Crankshaft take off his hat when he’s making out? Because we are all going down this path now so I can’t be blamed for making it worse.” –Vulcan with a Mullet

“Is he using a sword? To carve this turkey? In the middle of the night? Color me very confused. I guess the writer just couldn’t imagine anything a medieval serf husband might be doing in the way of ‘household chores.’” –Suzanne M Stephenson

“Do drive-ins still exist? If they do, do people take their kids to them, to see movies old enough that they can be played as a double feature because they predate 3 hour run times? If they do, no wonder those kids are upset, they wouldn’t be able to see anything from the back seat. Don’t cry, kids! All of these actors are long dead now so even if you could see you’d be bored!” –Truckosaurus

“I understand they’re doing a Flintstones shtick but they should be in a Neolithic round house and dead. They’re too old to still be alive. Hi and Lois should be dead.” –Professor Well Actually

“Marvin’s dad’s coworker is clearly Superman, and he’s fishing for excuses to gush about how great Earth’s yellow sun is.” –Rex_Thrillho, on Twitter

“I know that it’s just to make less work for the colorist, but seeing Gil and the presenter in red while the rest of the scene is in grey just makes me think of Schindler’s List, while makes me a bit nervous about this story.” –pugfuggly

“I kinda feel bad for Marvin’s writer who has spent so much time trying to come up with new ways to make jokes about human excrement that he’s forgotten how real adult people initiate conversations.” –Tabby Lavalamp

“I wouldn’t stand so close to insects with a taste for decrepit flesh, Lillian and Ed.” –nescio

“Relax, Hi. It’s obvious that Foofram is adding up the cumulative efforts of all the losers at the meeting. Now because of that gaffe, you’ll have to sit through another hour of him trying to explain it all using conic sections.” –Hibbleton

“God, the fresh baby brain earnestness on Hi’s face. ‘But sir! 100% is by definition the most you can give!’ Later he’s gonna loosen his tie, collapse on the couch as Lois rubs his shoulders, and whisper, ‘Idioms! They never covered that in the project management webinars.’” –Dan

“Now we see the true scope of Crankshaft’s plans. All those years of being a curmudgeon, all those exploded grills and wrecked mailboxes, all the malapropisms and misanthropy have led him to this victorious summit, where he feeds the ground-up remains of his victims to flies — in public — and no one will bat an eye. That’s just Crankshaft, they think, the town’s biggest asshole, little realizing that before them is Ohio’s greatest monster.” –Voshkod

“Between the watery platitudes and the ever-so- subtle roaming hands, Jared is in his Zone.” –MKay

“I think this is the first time I’ve rooted for a couple to get back together in Mary Worth but if there’s anyone who deserves to have Wilbur as a father-in-law it’s Jared.” –Tabby Lavalamp

“Hey! I’m asking you to take me home and show me your etchings, goddammit! Just how senile are you, anyway?” –cheech wizard

“In the first panel, the doctor is horrified at the thought that he’s listening for a skeleton’s heartbeat. In the second panel, he’s horrified that he hears one.” –Peanut Gallery

“Gray jacket. Black pants. And brown shoes. Yeah, maybe someone should pay more attention to his wardrobe. You’re wearing brown shoes. Brown. Stop the insanity. Stop getting dressed in the dark. By the way, it’s hammer time.” –made of wince

“You know how your small-minded people got all paranoid that my people would use our immense power in an evil scheme to take over your world? Well, funny thing about that…” –Artist formerly known as Ben