Whoops, I was going to do a whole bit about how this bulldog straight-up murdered someone in prison “the kennel,” but it turns out that teardrop tattoos are polysemous, with as many meanings as there are people who get them. So instead I’ll just say that I really admire the 3D, photorealistic work on this one, much better than you usually see in from tattoos people get while incarcerated, and even more impressive when you realize that the artist probably didn’t have thumbs.

Look, if you had told me when I first launched this blog that I would be spending a lot of time contemplating the romantic and reproductive lives of mermaids, I might’ve taken a different path in life, but I’m here now and have to make the best of it. Anyway, we now know that, in the early stage of their lifecycle, mer-people have a fish upper half and mammalian lower half, which is really quite a fascinating discovery! Also, as with fish, it seems that the sperm and egg meet and fertilize outside the body, meaning that the young must be retrieved and delivered to the mother by a stork (a species that coexists with mermaids in some kind of symbiotic relationship) in order to be properly raised. (On the other hand, it’s possible that this baby is a reversed generic abomination that the mother tried unsuccessfully to toss into the sea, and this stork is just confronting her with her responsibilities.) 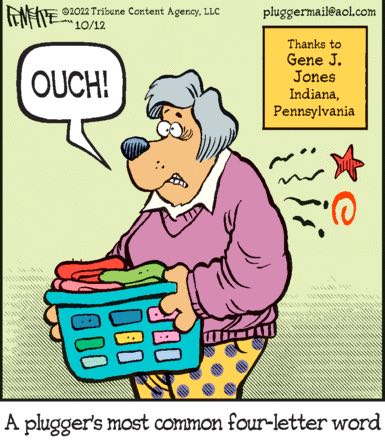 Ha ha! It’s funny because pluggers are in pain, all the time!