My own foray into publishing managed to avoid the book fair circuit, which I guess is lucky for me, because there are weeks and weeks and weeks of Crankshaft strips where book fairs are depicted as the most annoying experiences anyone could possibly go through, so much so that Lilian’s second book is overtly a fantasy about murdering people there. But she’s still going back! Because that’s how you sell books now! And before you get mad at this lady for saying what she says and not buying Lilian’s book, keep in mind that Murder At The Book Fair is, as noted, Lilian’s second book, and by saying that “Your books are my mother’s favorites!” that pretty much implies that her mother already has both of Lilian’s books. So why would she need to buy another copy? Enjoy your time at the book fair, nameless woman! I’m sure there are plenty of other books out there your mom will like!

One of my great pleasures in life is stumbling upon Wikipedia articles about things I think I know about but it actually turns out there are very important things about the subject of the article that I didn’t know at all. Like, it wasn’t until I read the Wikipedia article about The Thinker that I learned that “The” Thinker is actually at least 28 separate and distinct statues, all cast from Rodin’s original, which is part of a larger work called The Gates of Hell. That article also, in the section discussing the prevailing theory that the figure in the sculpture represents Dante, contains a sentence that has been seared into my brain ever since: “Other critics reject that theory, pointing out that the figure is naked while Dante is fully clothed throughout his poem, and that the sculpture’s physique does not correspond to Dante’s effete figure.” Dante Alighieri is, of course, the effete, fully clothed poet we all know and love, and when we think of him, we think of the clothes he wears at all time, to conceal his scrawny physique. Anyway, something the Wikipedia article does not mention, since it’s so obvious that nobody would think to talk about it, is that absolutely nothing about the way the figure’s hands are positioned, with one under his chin and another resting on his knee, allows one to make the humorous observation that maybe he’s looking at his phone.

In the world of Mother Goose and Grimm, the line between sapient and inanimate objects is a blurred one, and I really appreciate that Ralph’s date isn’t a broccoli with, like, goggly eyes and arms and legs or something, but just a giant stalk of broccoli, motionless and unthinking, propped up in the chair. The punchline, which I guess is an attempt to play on a confusion between “vegetarian” and “vegetable,” is bad, but the image of Ralph sitting across from an inert, possibly already cooked piece of vegetable matter truly tickles me.

“Well, this worldwide coronavirus pandemic is going to affect people’s ability to travel or gather in large groups, and is even modifying how we greet each other, but probably the whole world won’t be on lockdown with most economic activity suspended by the time these strips run!” –newspaper comic strip creators a few weeks ago, apparently

I very much love that the Crowleys feel like they have to make a stirring emotional appeal here, rather than just saying, “Well, society frowns on it when you just leave a little boy to die in the woods.” And, you know, I get it! Have you seen Kevin? 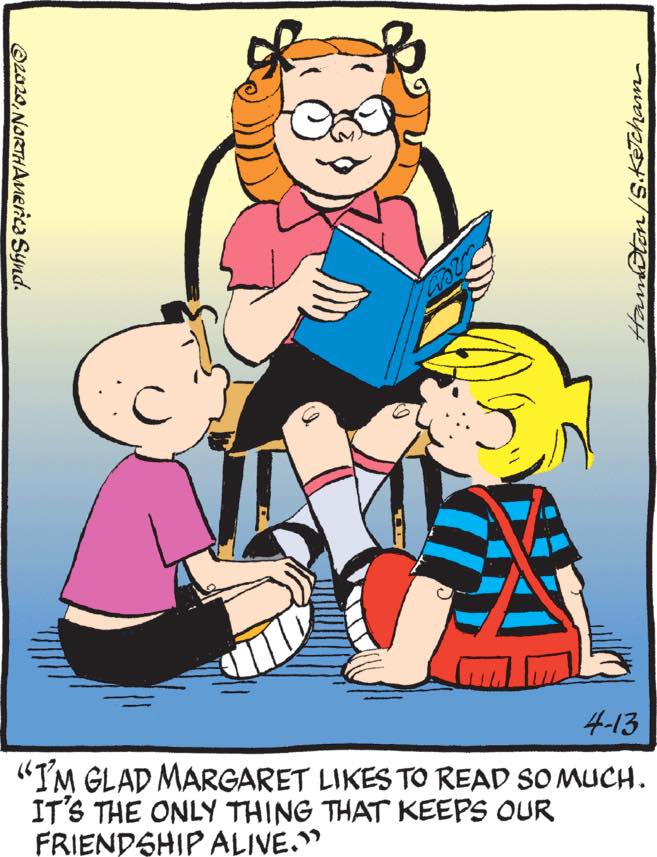 We’ve discussed Dennis’s tentative journey towards literacy before, so now I’m spending a lot more time than I really should contemplating why Dennis sitting at the feet of a girl he normally loudly claims to be unable to stand, waiting for her to do something for him he could probably do himself, and I’m feeling personally menaced by the answers I’m coming up with and what it portends for their relationship post-puberty!

I think the joke here is that the mummy is very bad at cooking because he … doesn’t have … eyes? Like, can mummies not see, in the classic horror-movie mummy canon? As near as I can tell, mummies’ traditional powers involve shuffling forward very slowly and moaning, so the fact that they can’t see anything makes them even less scary. Anyway, if I were doing this comic, I’d make the joke about how the mummy is covered with highly flammable linen cloth, preserved over the centuries by the bone-dry Egyptian desert, which would have hilarious results next to a stove’s heating elements, but I guess that’s why I’ve always been deemed “too edgy” for the newspaper funny pages.

DICK TRACY UPDATE: Shaky (remember him?) had his big meetup with the Tracys and ended up getting shot in the shoulder, and now he’s laying low at some criminal safehouse for which he had the keys, except it also happens to be where crime-family-adjacent characters Ugly Crystal and her bio-dad (remember them?) are living. Anyway, this has all been funny because Shaky has been trying to “play it cool” despite slowly bleeding out from his bullet wound, and while it isn’t quite as theatrically awful a death as you would’ve seen in the Dick Locher years of this strip, watching his agony mount has been pretty impressively grim, I’ll say that.

Wait, do all the characters in Mother Goose and Grimm live in the Land of Oz? It would explain all the talking animals, I’ll say that much.