It’s Friday, which means (a) it’s comment of the week day, but also (b) we’re a week away from the Internet Read Aloud, and we have a VERY SPECIAL Internet Read Aloud this month, featuring Annie Rauwerda of Depths Of Wikipedia fame, which if you know about me you know is a project that is very much my jam and I am very excited about it. Please come to this one, if you’ve been putting it off! Here’s the Facebook event, and the poster! 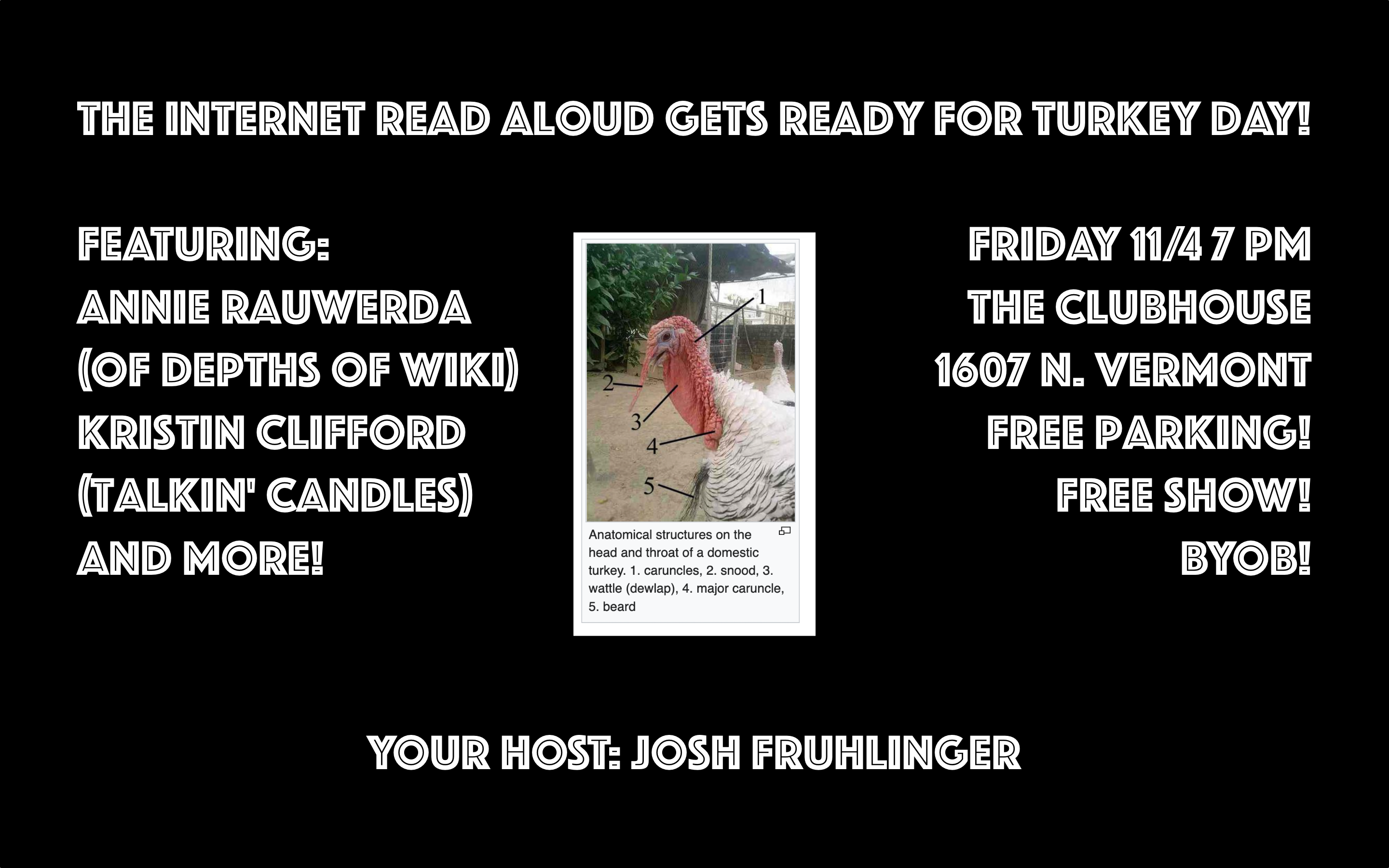 And here, of course, is the aforementioned COTW!

“Tomorrow at the diner, Lou says to Dagwood: ‘So. Yesterday was National Food Day. We had a big special menu and everything.’ Awkward pause. ‘Didn’t see you around.’” –Peanut Gallery

And here are the very funny runners up!

“Dustin spends 365 days a year shitting on Millennials, but Mary Worth just a had to spend one day for the excellent burn ‘killed by a selfie.’ Bow to the master!” –@Ettore_Costa, on Twitter

“For the past 20 years, airline pilots have been America’s heroes, to be respected and not mocked. Now Dustin’s dad is breaking that taboo. Now, I don’t support attacking anyone over a joke, but if one last surge of patriotism got Dustin’s dad beaten up by the passengers or arrested by the air marshal… well, I’d turn a blind eye.” –Schroduck

“The only thing I want now from Mary Worth is for each of the characters to fall into their own unique body of water to their apparent demise, only to wind up at a Club Med. Dr. Jeff into the cove near the Bum Boat, Dawn into the Great Salt Lake, Toby into a bottle of Dasani … I want the lot.” –Vice President John Adams

“A father seeing the image of his adorable infant daughter on a mug and asking, ‘What’s that?’ with a look of total deflation is a real showcase of how postpartum stress doesn’t discriminate. Try and find joy in these moments, Hi. After all, she won’t be a baby forever! What’s that? Oh, I’m sorry, carry on.” –Irrischana

“The boss really stumped me today. He looked over my completely inappropriate display of food and told me, with contempt dripping in his voice, that he only kept me on the job out of pity. That he knew he should fire me, but something held him back. A inner demon he fought with every day, a spark of kindness that he knew he needed to tamp out before I destroyed the company. He reminded me that I was always there on sufferance, and that some day he’d finally be ruthless enough to fire me, to blackball me from the industry, to end my laziness and stupid costumes and misuse of IT resources. He said his only joy was telling me of the Damoclean sword that dangled above my head at all times. Then the old bastard took the drumsticks from my turkey and walked off. I just don’t get it.” –Voshkod

“It takes a special kind of cultural myopia to watch an adaptation of a Pulitzer-winning drama about how racism and toxic masculinity inhibit the pursuit of the American Dream and think ‘I wanna drive the garbage truck!’” –TheDiva

“Summer’s book will presumably be a damning exposé on the corrupt, decaying nature of Westview aimed at destroying small-town nostalgia. It will contain numerous passages about the town’s rampant mental health issues and out of control cancer rates borne out of incompetent city planning. ‘The lead poisoning has rendered many of the townsfolk so delusional that they can no longer respond to anything without making a heavy-lidded smirk.’” –ectojazzmage

“Normally on a call-in format you’d have a producer who would be able to screen out the most inane calls, so you get an idea of how popular this show is. I can only imagine that after this call was ended they went to fifteen minutes of dead air, broken occasionally by the sound of Dustin’s mom taking sips of coffee.” –pugfuggly

“Buck once had a damn nail through his head, but a tall loud man is too weird for him to deal with. Sad, really.” –made of wince

“Before I read the caption, I thought she was about to give birth. I know she doesn’t look pregnant, but kangaroo embryos are, like, the size of a worm.” –Pozzo

“[I emerge from bushes] ‘USE YOUR OTHER HAND ZAK!!’ [I disappear back into the bushes]” –Kevin On Earth

“The bad news is that Iris can’t rescue her imperiled boyfriend. The good news is the rockface Zak is clinging to seems to be rolling over seeing as the rock has already tilted 30 degrees in his favor. So in a few seconds Iris won’t have to do anything at all to help him, though by the time Zak is safe she will have her own problems.” –jroggs

“This derisive attitude toward recreational marijuana seems pretty rich coming from someone who’s been disregarding the office no smoking policy for at least thirty years.” –Spunky The Wonder Squid

“Ah the annual Closing of Montoni’s. Everyone gather around the mammography unit and deck the halls with issues of ‘Mystery in Space!’ It’s time to get halfway through a carol before cutting it off with a heavy-lidded pun!” –Dan

“I overthink the economics of Funky Winkerbean but I’ve been to a lot of small towns and if that town can’t even support the local pizza joint anymore it’s time to move before Lord Humungous appears out of the desert and enslaves the residents.” –jerp+jump