I spent a probably embarrassing amount of time staring at this thinking “Which of the third-tier Blondie characters is this dressed up as Santa at the bowling alley with Dagwood and Herb? Is it one of the carpool guys, or maybe the barber?” before I realized that … it’s supposed to actually be Santa, I think? Santa is real, within the Blondie universe? He’s real and he goes bowling with random suburbanites, just days before Christmas, in what should be his workshop’s busiest time of year? 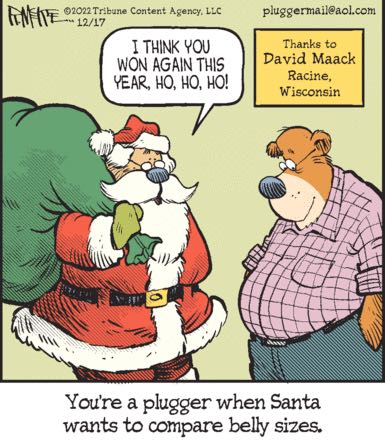 I guess that’s better than the Pluggers universe, where Santa is also real — a real freakish man-animal of some kind, that is, and he also treats body positivity as a weird series of contests.

Gertie, “Who’s On First” hit the peak of its popularity in the 1940s! I’m pretty sure you’re too young to know about it.