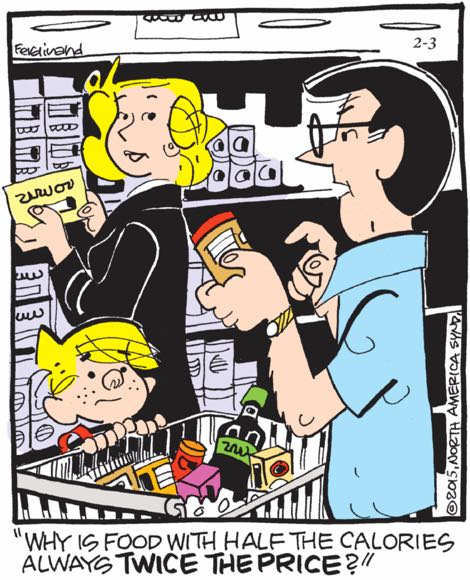 You know what, you try coming up with a cute-but-not-too-cute joke-utterance to put into the mouth of a menacing-but-not-too-menacing little kid, day in and day out, for decades, OK??? It’s not easy! Sometimes you want to do something else. Sometimes you might want to put in a joke written by grownups, for grownups. Like that diet food, amiright? There’s fewer calories, but it costs more money! What’s up with that? Dennis’s exaggerated grimace at his dad’s comedic stylings is actually one of the more subtly menacing things he’s done lately.

I’m used to thinking of Captain Preppie as having been rendered largely harmless by his own relentless self-absorption, but panel one completely upends that impression, rendering him as a wild-eyed predator, attempting (and, thankfully, failing) to recruit others into a band of sex maniacs.

Well, Monday was one of those days, with this site unaccountably down for a few hours, followed by the unavailability of the King Features Web site. Since King Features is the origin of most of the color comics we follow here, including Mary Worth, Funky Winkerbean, Mark Trail, Judge Parker, Apartment 3G, and Rex Morgan, M.D., well, you can see the problem!

I’ll post a note here when I hear that King (and therefore the Chron) is back up, although some alert reader is sure to post the news in the comments before then.

Update 1/30/07 11:15 EST – King Features and Chron back up.
Many, many thanks to faithful readers gh and willethompson for scanning and sending MW, FW, RMMD and JP backups, but it appears the crisis has passed.

Until then, I have a confession to make:

Robots terrify me. I’m convinced NASA made a big mistake sending them to Mars, and I bet they wouldn’t tell us about Elvis even if they found him. I felt a lot better about Darth Vader when I figured out there was a guy inside. I have a Roomba, but I keep an eye on it, and unplug it at night.

So I’m really ambivalent about Diesel Sweeties. It’s pretty smart about human/machine relationships, the IM-style graphics give it a distinctive look and can be surprisingly expressive, and I love love love the nonspatial references (like the Sweden flag here) that just pop in and out when they’re needed. On the other hand, the human characters are really shallow and there are too many of them – it’s like they’re in tryouts. The human/human relationship strips fall really flat. And, well, robots are evil. Everybody knows that.

In panel one, we have a robot; in panel three, Alex Doonesbury. If you’re looking to strike up a relationship of any kind, pick the robot. Alex is a self-obsessed, whiny, manipulative, spoiled, . . . well, I could go on and on. She is a twenty-four carat pain in the ass, even though she’s surrounded by some of the most engaging characters in all of comics. But she’s even though she’s completely unlikeable, she’s entertaining. See, Lynn? See? That’s how it’s done!

This has nothing at all to do with technology, but gah. GAH! How many times will we have to sit through this same damn storyline? Aaron f’n Hill, Bernice’s wheelchair guy, Toni f’n Daytona, fill in the f’n blank. Now I like Greg Evans’ work! He draws cartoon people – particularly girls – better than almost anybody around, and his faces are expressive (compare with Foob’s “I have been hit with a baseball bat” universal reaction shot). But the guy can’t plot for stink. Luann, I’ve got sad, sad news for you. You’re marrying Gunther.