It’s never particularly fair to compare any comic to Peanuts, but I was struck by the convergence of Ted’s team snatching defeat from the jaws of victory with one of the earlier Charlie-Brown’s-baseball-team-are-losers storylines. This strip again goes to show how routinely Peanuts was probably the bleakest thing not just on the comics pages, but in the entire newspaper. Ted at least is directing his rage outward in an emotionally healthy manner. Presumably the tears and self-recrimination will happen later.

More interesting than the dating etiquette of Milford High students is … well, anything, really, but I’m thinking here of Marty Moon’s sad little face in panel two. “Hey guys, I thought maybe the three of us could hang out … guys? Oh, um, that’s OK, I’ll just go back to my car … I have some booze … I’ll be fine…”

If you’re wondering how Von and Mandy managed to save Marty’s bacon … Ben Franklin figured out pretty quickly that the two of them were pulling some elementary scam, was impressed by their moxie, and cut Moon’s $5,000 debt down to $500. No, I don’t understand it either. 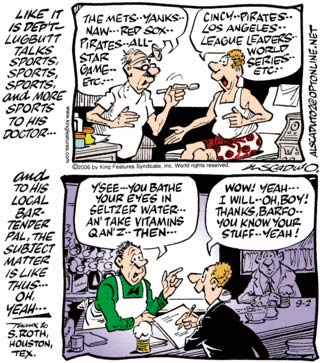 Note that Lugbutt and his bartender are totally capable of speaking in complete sentences, but that he and his doctor communicate entirely in a disconnected series of proper nouns. For me, the ironic reversal would have been much better if he and the sawbones had spent the whole visit talking about booze. “Beer … malt liquor … scotch … vomiting … rum … cirrhosis of the liver … vodka … etc …”

As strongly as I oppose reruns and zombie comics squatting on the ever-shrinking comics pages, I must shamefully admit that I still like seeing Peanuts there — particularly now that the reruns have looped back to the strips from the 1950s. Not only are these strips sharper, meaner, and funnier, but the strip’s overall timeless quality makes it all the more jarring when a passing fad — college students cramming themselves by the dozen into phone booths, say — suddenly pops up to remind you that you’re seeing an artifact that’s more than a half century old. I really love the bizarre wreath of feet surrounding Charlie Brown’s face in this strip. And though he’s usually portrayed as the ultimate loser, in this particularly instance he’s come out on top: he’s the only participant in this stunt getting any fresh air. 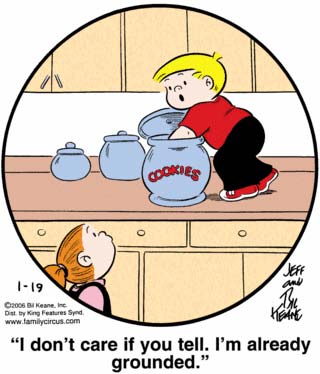 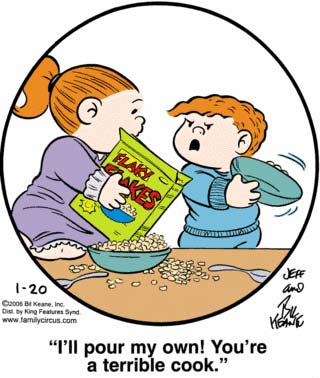 Lotta hate in the Family Cicrus over the past couple of days. Billy’s the cool one, all anodyne disdain, hitting on the fact that the worst that can happen to him is meaningless, which means that there are no rules and nothing to hold him back from fulfilling every desire of his id, from putting his contempt for his fellow Circus members on display for all to see. Jeffy, as usual, is more volatile, his hatred of his family and himself breaking out uncontrollably as he flies into a vicious rage for no reason. Poor Dolly is there to mutely bear the brunt of the bad behavior. Don’t worry about it, honey: it’s about their own demons, not you.

I add here today’s classic Peanuts from 1959, in case the Keanes want to see just how dark a kid’s soul can get.