OK, let’s start this catching-up post with the events over in the province of Foobonia that have had comics readers across Canada and the U.S. (aka “Baja Manitoba”) so exercised. I actually don’t have much to say on the subject except to reiterate what most have already said, which is FOR GOD’S SAKE EVERYBODY CALL THE GOD DAMNED MOUNTIES OR SOMETHING BECAUSE HOWARD JUST TRIED TO RAPE ELIZABETH AND WE’RE ALL STANDING AROUND MAKING LAME-ASS PLAYS ON WORDS AND LAUGHING BEHIND OUR HANDS. Ahem. I mean really, even an accountant — even a Canadian accountant — can’t possibly think that a little ear-twisting constitutes sweet vigilante justice.

On the other hand, I’ve given up on hoping against the inevitable Liz-Anthony get-together. Of course, in real life, Thérèse would make their future lives a living hell vis-a-vis the adorable little baby whose name I now forget, but the strip has shown her being so unrealistically disinterested in the little bundle of squalling, pooping joy that no doubt she’ll be happy to let Liz adopt her (him?) and turn him (her?) into a Patterson By Proxy. And everyone will be happy ever after. Except, we hope, Howard.

With those weighty subjects out of the way, let’s move on to a little nose-picking from Monday’s Curtis:

Now, I ask you: is this the most graphic depiction of prospecting for nostril gold ever to grace the funny pages? It’s not so much the visual that bothers me, offensive though it is, but the explicit — well, I’m not sure if they’re sound effects or stage directions, exactly, but they’re gross, and the accompanying motion lines don’t help. Though I have to admit that I’ve always liked the Curtis convention of people suddenly sprouting enormous eyes and long, luxurious lashes when they’re being disingenuously cute, as Barry is here.

I continue to be utterly horrified by Mary Worth’s treatment of both women’s shelters and alcoholism. I kept waiting for Mary’s illusions of the horror that is downtown to be shattered by the tough-minded but caring women who took in Rita when she had nowhere else to go. Instead, we’re treated to a tearful reunion while a bunch of slightly mussed but reasonably well dressed white women stare and listen to the shelter-bashing in creepy silence. Check out panel two of Friday’s strip — Rita is so desperate to get the hell out of there that she’s pushing Mary out the door, despite the fact that there’s been zero evidence that anything bad happened to her there. Maybe she’s just happy that she won’t have to look at that woman with the huge cyst on her face anymore.

But hey, at least Boilface never took her to the scene of her one of her most humiliating drunken moments and expected everything to be fine. Yeah, Rita, I suggest you go down the “complete abstinence” route — though of course I’ll be having the ketchup-colored Chateau Heinz with everyone else in here. Hope you don’t mind driving home!

I really, really hope that, in tomorrow’s strip, Rita’s answer to our bow-tied waiter’s question is “A double scotch — and make it #$&*#($ing snappy!” And then further hijinks ensue. Mary needs to learn that clever rhymes are no substitute for a treatment program run by certified substance abuse counselors.

If you haven’t been following Gil Thorp’s non-stalking storyline, then I don’t have anywhere near enough time to explain why Sports Illustrated’s Rick Reilly is lurking in the bushes, ballpoint pen and reporter’s notebook in hand, waiting to hear this vicious anti-Pac-10 diatribe. I would just like to say that this development reminds me of the embarrassing amount of time I spent as a youth watching Scooby Doo, whose adventures would often feature guest spots from the sort of big name stars that your typical eight-year-old living in 1982 would be sure to love, such as Phyllis Diller or Tim Conway. I’m sure said stars were happy to spend twenty minutes in the studio recording some lame-ass jokes and then walk off with a nice pile of dirty, dirty Hanna-Barbera cash. Rick Reilly didn’t even have to do voice work, though I’m assuming he also didn’t get paid or have any creative control. And in fact, perhaps the latter is something of an issue. Here’s a look at the real Rick: 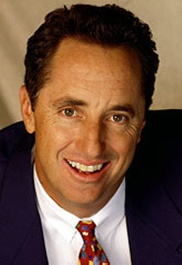 Now, the photo reveals that Mr. Reilly has a fairly typical number of smile lines around the eyes for a man his age. His Thorpian doppelgänger, on the other hand, has crow’s feet that are so pronounced that he appears to be wearing KISS make-up. Way to treat your guests, guys!

And speaking of special appearances, “Smitty Smedlap” of Subdivided We Stand has already pointed out that the evil coach is really none other than radio’s own Don Imus, and put together this little graphic to prove it: