Yeah, why is she so down? Maybe it’s because she’s headed out to work, churning out awful press releases, pimping no-talent actors and playwrights, glossing over the crimes of evil multinational corporations — you know, the sort of things that keep New York, the greatest city in the world, humming, and all for a salary that isn’t going to keep a girl in Kate Spade and Jimmy Choo like she deserves. Meanwhile, the two of you, who have selfishly chosen high-paying, zero-stress jobs in the nursing and elementary-school-art fields, get to enjoy a leisurely breakfast over the paper, relaxing in your deeply dowdy but no doubt warm and comfortable robes.

Honestly, it’s like being white, unscrupulous, and upwardly mobile doesn’t mean anything anymore.

I thought that the chatter in the comments this morning had prepared me for the harrowing sight of Mark Trail’s muscular but nippleless torso. I was wrong. Hoo boy was I wrong. No one had mentioned that there was something deeply freaky about his face as well. Is that a shadow cast by his sunken, heroin-addict-style cheekbones, or is he just wearing black rouge? Whatever the case, he joins Dagwood Bumstead in the no-nips hall of fame: 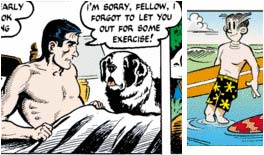 Also, is anyone else as unsettled by the current teenage-jewel-theives-in-fetish-masks plot in the Phantom as I am?

Yeah, I didn’t think so.