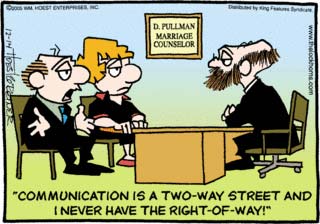 Ah, marriage! When it goes well, how sweet it is! How it fills both partners with joy and helps bring two souls together as one! And when it doesn’t … well, then it’s delicious fodder for laughs, laughs, laughs! As if the last few weeks of Mary Worth divorce drama hasn’t been enough to prove that, we’ve got not one but two marriage counselor strips today. This Lockhorns panel isn’t “funny” per se (unless we’re talking about the oblate spheroid that is Dr. Pullman’s head, which is funny, but not ha-ha funny), but at least it stays true to the strip’s overarchingly bleak tone and subject matter. Look at Loretta’s face. A lesser comic would have had her smirking triumphantly at the fact that she always gets the last word, or have her brow furrowed with rage that her foibles were being aired in a public forum. But the Lockhorns never feels a need to step back from the brink of the abyss, and so Loretta’s face is just one of numb depression: she and her husband can’t communicate, her marriage is killing her, and the overpriced, bald-headed sub-Freud across the desk isn’t going to say anything that’s going to fix it.

Similarly, today’s Kudzu is true to that feature’s usual M.O., which is to say that it’s perfectly happy to cast aside even its wafer-thin sense of internal cohesion in order to follow some half-assed joke idea to its not-funny conclusion. I mean, why are they … that is, what is it supposed to … or, why should we … oh, forget it, just forget it.

One thing I and millions of comics readers will never forget is this little gem from today’s Judge Parker:

Watch it, April, he’s just going to show you “the claw” later himself — and he hopes you’re going to like it!