Apparently the Phantom people have been carefully studying Spider-Man, their arch-rival in the daily-adventure-soap-opera-comic space. The latter strip has over the past few months completely abandoned traditional superhero fare, with its crime-fighting and excitement and such, in favor of tedious domestic drama that serves mainly to illustrate the incompetence and overall unlikeability of its protagonist, and that’s clearly a star to which the Phantom ought to hitch its wagon post haste. I’m sure all loyal readers of this feature join me in looking forward to seeing what the next few weeks have in store for the Ghost-Who-If-Pressed-Probably-Couldn’t-Tell-You-How-Old-His-Kids-Are. Potential highlights:

Eventually, of course, the Big Purple Guy will realize that his half-assed attempts to be involved in the lives of his offspring will never get any more assed, and will go back to punching out villains and ne’er-do-wells, leaving the kids once again to the care of his wife — or, since his wife is apparently some kind of UN bigwig, to the care of the nannies or jungle tribespeople or feral cats or whoever the hell’s been raising them. Then they won’t surface again until it comes time for the Phantom to pass the job onto his son, who in his absence has become a graphics designer.

Anyway, what’s intriguing about this particular strip is the look of confusion and interrobanged betrayal on the look of cone-hatted pygmy sidekick Guran in panel three. My guess is that Guran is hurt because the Phantom’s sudden overdue interest in his biological offspring will cut into their own relationship, which can best be expressed by the following analogy, in standard SAT format:

The fact that Guran is an adult does not invalidate this analogy. It is a well-known fact that Emmanuel Lewis was 32 years old during the first season of Webster.

Meanwhile, in Apartment 3-G, we get a full sense of the mettle of Margo’s mega-evil bride client, Nina Blake. We all knew she was Margo’s rival in sheer bitchosity, but today we get to behold awesome power of her killing grip! 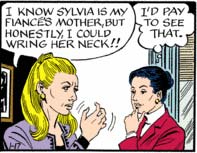 Work it like a claw, Nina … and for God’s sake, don’t anybody call her Randy.