A cornucopia of comics for your Sunday afternoon and/or Monday return to work! Let’s get one thing out of the way right off: in my rush to cover the burning hatred in the Family Circus on Friday, I neglected to bring this gem from Friday’s Gil Thorp to your attention:

It should also be noted that Jenny Su apparently leads the league in horrifying noselessness. I think that if I were moving in for a smooch, I’d be distracted by the twin punctures in the smooth flesh of the middle part of her face, where her nose should be.

Still, if she had told me in high school that I led the league in cute, I probably would have gone out with her. It’s a good line.

Now, on to Saturday. Let’s start with the foobs:

(Gah, it’s foob images! What about the lawsuits? Well, as near as I can tell, what the For Better Or For Worse folks don’t like is if you “hotlink” to graphics on their server — that is, if you make graphics hosted on their computers appear on your site. Since I’m hosting this myself, it shouldn’t be a problem. We’ll see.)

It seems like everyone loves to hate For Better Or For Worse. I’m not one of the haters, but it does drive me up the wall at times. Mike’s mother in law in particular drives me batty, as she doesn’t seem to have been given a single redeeming characteristic to explain why her daughter puts up with her endless stream of crap. Thus, this week has been sort of torturous, though there was a glimmer of light when it was implied that she might be in the process of slipping into dementia, which might result in some deeply gratifying images of Mrs. Sobinski being dragged off in a straightjacket, raving like a lunatic about people banging on the ceiling downstairs. Saturday’s strip is particularly creepy, though, as it implies that Michael and Deanna’s choice to spawn more Pattersons might have set them on a collision course with madness themselves.

You know, if had told me earlier this week that Mark Trail was going to further slander the noble hillbilly, I would have said that it would be impossible to do so, but boy, would I have been wrong. On the bright side, this strip finally delivers the climactic fisticuff-heavy payoff that’s been bafflingly absent from the last few adventures. We start off with what may be the first kick in the ‘nads in the history of the comics. (It should be noted that in the strip before this, our skinny redneck threatened to “mess up that pretty face of yours,” thus proving that his grasp on anatomy is almost as tenuous as his understanding of hand-to-hand combat tactics.) Of course, mega-man Mark manages to dispatch the rural ruffian with a single blow and, in move long on dramatic symbolism and low on common sense, proceeds to carry his limp body over to a pen full of lovingly rendered pigs — while surrounded by heavily armed members of said ruffian’s family. Do they even know how to use those guns? Are they antiques left over from the War of Northern Aggression that won’t actually fire? For God’s sake, you dumb rednecks, shoot him already! A bullet in the shin will both teach this short-tempered naturalist a lesson and get you your dog ransom money faster than all this standing around slack-jawed business, trust me.

The current Rex Morgan storyline has been so boring and slow moving that I’m not even going to bother to bring you up to speed on it. I’d just like to point out that Rex’s rasta-mon cab driver is frickin’ hilarious. Particularly amusing is his use of the phrase “hang on to your hair.” See, he’s unfamiliar with English idioms because he’s from Jamaica, where they speak … oh, wait.

Meanwhile, the Sunday funnies treated us to not one but two cartoons about dogs going to the bathroom. 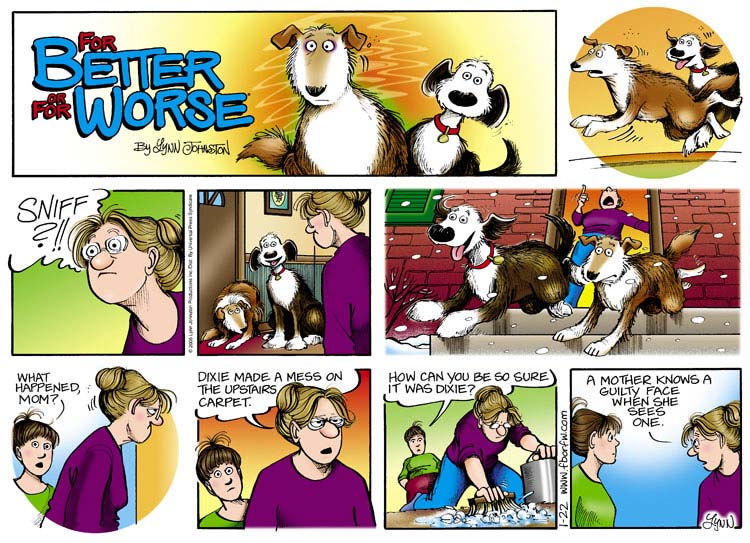 The stink lines in the first FBOFW panel are nicely done, as is the look of mingled disgust and shame on Dixie’s face in the next panel. However, it’s Grimm’s precarious situation clinging to the hydrant that really made me laugh aloud. His look of contentment in the next to last panel, followed by his embarrassed admission that he really is going to do what must be done no matter how gross it gets, are real winners.