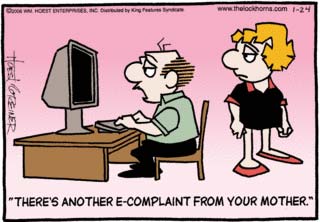 I love it when people write angry letters to the paper. I’m a connoisseur of ridiculously overblown outrage. My favorites, as you might imagine, are the people who complain about the comics, how they are full of sleaze like single mothers and gays and uppity Negroes and people who use the word “butt” and/or “Jesus Christ” (the latter irreverently) and won’t someone please think of the CHILDREN? It’s always the CHILDREN who must be protected, because, as we all know, the CHILDREN are the ones who read the comics pages.

Well, if I were a child, I would be less disturbed by gratuitous use of the word “butt” and more by authors who think that its funny to admit that you have no concept of how high tech devices work. If I were around 8, I’d just be puzzled that there was anyone out there who was so dense; if I were around 12, I would just feel disgust and contempt for such fogeys. I don’t mean to hate on those who are baffled by all our modern conveniences — I’m sure that fifty years from now all the kids with their skull-installed data ports will be mocking me — but today’s Shoe and B.C. just seem to exude a certain stubborn pride in not getting it. (Does Johnny Hart really think that the word “iPod” should appear in a different font from the rest of the sentence? Does he even know what one is, outside the context of those ads with the shadow people?) The Lockhorns, meanwhile, doesn’t even bother to engage with technology, and merely seems to believe that mother-in-law-joke + “e-” prefix designating technology of some kind = comedy gold.

Some comics actually do a good job of dealing with technology jokes. Dilbert and Fox Trot are obvious examples; and For Better or for Worse does a pretty good job of showing how Internet communication is a casual part of people’s lives (particularly young people’s lives). Even Cathy’s endless Irving-becomes-obsessed-with-some-gadget storylines ring true in terms of how some people go a little tech-crazy. Those plots still aren’t funny, mind you, but they don’t come off like they’re being pounded out by some gin-crazed 90-year-old on a aging Selectric typewriter, or shouted into one of those old-timey phones with a crank on the side.

Oh, and I couldn’t let this one by: 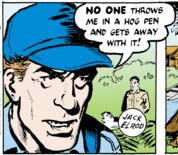