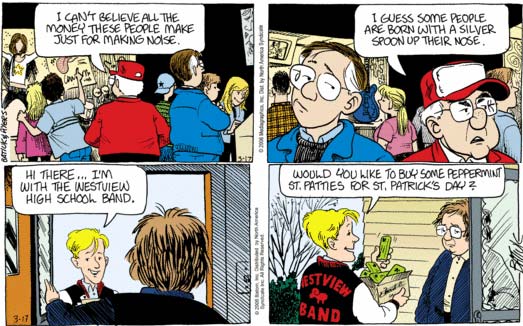 Again, due to relentless pressure from my readers, I have begun reading twin strips, Crankshaft and Funky Winkerbean, years after my last acquaintance with them. I have fond memories of FW from my youth, having been a dorky band dork, though I was perhaps too far removed from the marketeer-coveted cranky-old-guy demographic to care much for Crankshaft. As promised, both strips seem to have been transformed into well-drawn but plodding quasi-soaps at some point in the course of my young adulthood.

I’m featuring Crankshaft today, which takes place at the Rock and Roll Hall of Fame, for two reasons:

This Funky Winkerbean, by contrast, seems to me to exemplify all that’s wrong with the retooled strip. I used to love the FW episodes about the megalomaniacal band teacher and his Glengarry Glen Ross-level mania for selling band fundraising trinkets. It was way, way over the top, as was everyone else’s terrified reaction to it. But here in the new, hyperrealistic Funky Winkerbean, blond boy’s busy selling to an gender-indeterminate mark who’s possibly the most depressed person in the history of the comics, including Charlie Brown. He (let’s call him a he, what the heck) looks like this unwanted intrusion is the final push he needs to download those painless-suicide-by-carbon-monoxide instructions from the Internet. Hopefully he’ll buy some candy first.

Meanwhile, Dr. Troy has finally outed himself … as a Canada-loving commie! 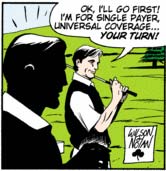