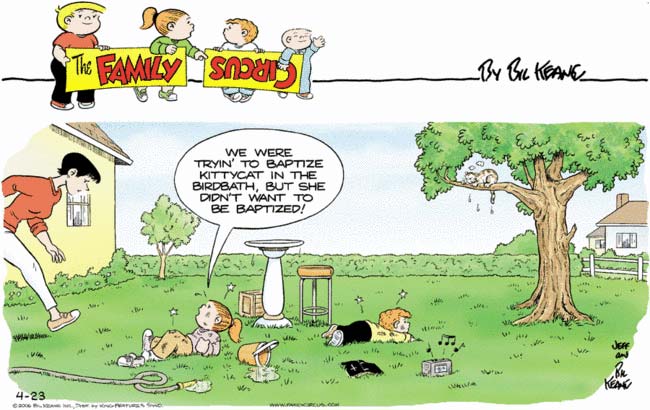 This may be the first time ever that I’ve appreciated the Family Circus in a non-ironic fashion. Then again, this may be the first time that the Family Circus featured the aftermath of a ghastly parody of a religious sacrament that quickly descended into child-injuring violence. My favorite aspects: the discarded bible, face down in the grass, its pages no doubt scratched to ribbons by Kittycat in a desperate attempt to escape salvation; and the dripping water and anger-produced steam emanating from the aforementioned still-unsaved feline. I am a bit curious about the transistor radio — tuned to some cheesy contemporary Christian channel, no doubt. I also think that it was overkill to use the hose and the bucket and the water already in the birdbath. They really tried to baptize the hell out of that cat.

Anyway, the only way this cartoon could have been improved would have been to dress Jeffy up like Robert Mitchum’s evil preacher from Night of the Hunter.

Criminey, DeGroots, this is the ghetto-ist replacement for a TiVo ever. Join the modern age, already!

This next joke, on today’s Rex Morgan, is courtesy of Mrs. C.: 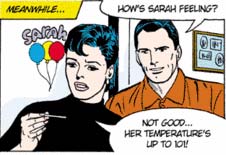 You know, for someone whose parents are a doctor and a nurse, Sarah sure is sick a lot.